The following items were selected and curated by Bryan Martin, Technical Supervisor. 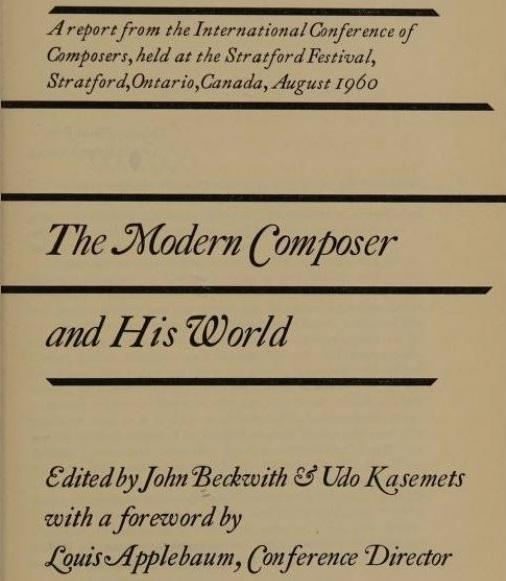 “On a sunny Sunday, composers from over twenty countries created a noisy but happy confusion that filled the small office in the Festival Theatre…. The greetings, meetings, questionings, and sortings, and the realization that the lengthy and sometimes trying efforts had, at last, brought together the composers we so long anticipated, contributed to a memory we shall long keep intact.”

So reflected Louis Applebaum on the International Conference of Composers, which took place in Stratford, Ontario in August 1960. “The Modern Composer and His World,” published in 1961 and edited by John Beckwith and Udo Kasemets, provides an account of the conference. The publication was donated to the Music Library by fellow professor and staunch library supporter Harvey Olnick.

In the library:
The Modern Composer and His World, ed. by John Beckwith and Udo Kasemets (1961)

After retiring from his position as general manager of the Metropolitan Opera in 1950, one-time operatic tenor Edward Johnson retired to his hometown of Guelph, Ontario, and became a champion of musical education. His activism included a stint as chairman of the board of the Royal Conservatory of Music. After his death in 1959, his personal collection of music and memorabilia was given to the Faculty of Music, and he was to be honoured with the naming of both the new Faculty of Music building and its library. A fundraising campaign was launched to help bring much-needed resources to the Music Library, with a goal of $75,000 (the equivalent of about $650,000 today). This pamphlet (see below), now held in the Faculty of Music collection in our archives, was part of that effort. The Edward Johnson Building is recognizable in the architect's sketch, which appears to be viewed from the roof of Trinity College, with the new library visible on the third floor, below the two futuristic Plexiglas domes.

Although the building would not open formally until 1964, the Edward Johnson Building was ready for use in 1962. Although the new Concert Hall (now Walter Hall) had seen some use during the summer, its inaugural concert series began on October 4, 1962 with a recital by alumna Teresa Stratas, accompanied by Walter Susskind, conductor of the Toronto Symphony. The series demonstrated the breadth and depth of the Faculty of Music's programs, with solo, chamber, and orchestral concerts, as well as a showcase of the new Electronic Music Studio (more about the EMS in a coming post). 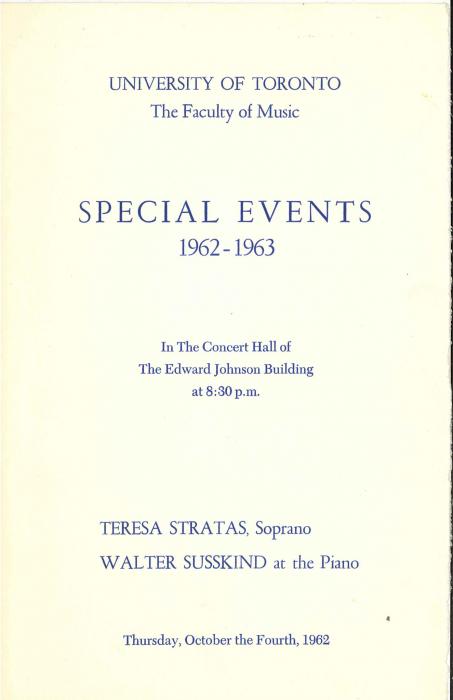 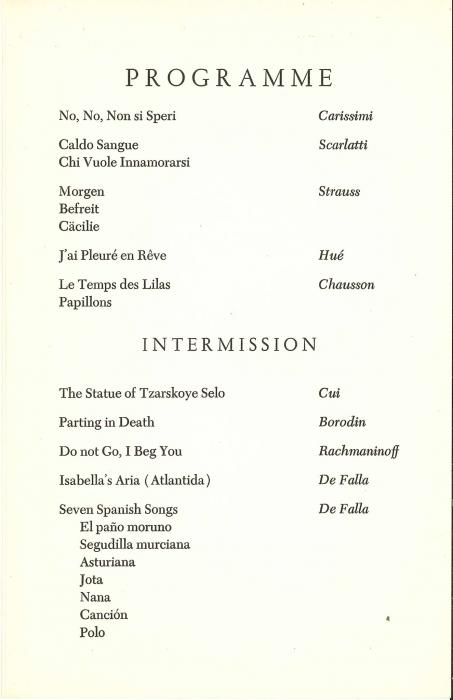 Promotional material and concert program from the Faculty of Music collection.

1964: Opening of the Edward Johnson Building

Although largely ready for use in 1962, the official opening of the Edward Johnson Building was delayed until 1964, largely because of sightline issues with the balcony of MacMillan Theatre. The Music Library featured prominently in promotional material for the Faculty of Music. Especially noteworthy was the Listening Room, where patrons could listen any of thousands of discs and tapes. Two large skylights provided plenty of natural light to both the library and the main lobby of the building. Eagle-eyed viewers will notice one of our distinctive study carrels, still in use today, although smoking is no longer permitted. 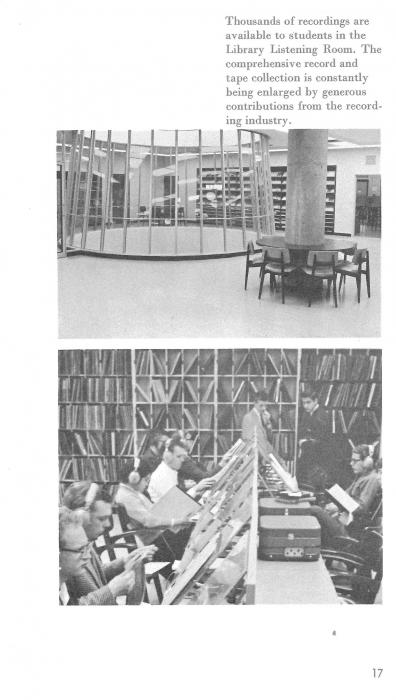 The library occupied the entire third floor of the Edward Johnson Building. By the mid 1980s, there was no longer enough space for the constantly expanding collection, and a new library was constructed below ground behind the Faculty of Law building. Once the new Music Library was completed in 1990, the old space was converted into a large classroom, a common area for socializing, and offices and studios. Some elements of the original library survived, most notably the Listening Room, which eventually became a music technology lab. Sadly, the beautiful Rare Book Room is now a storage and network closet. 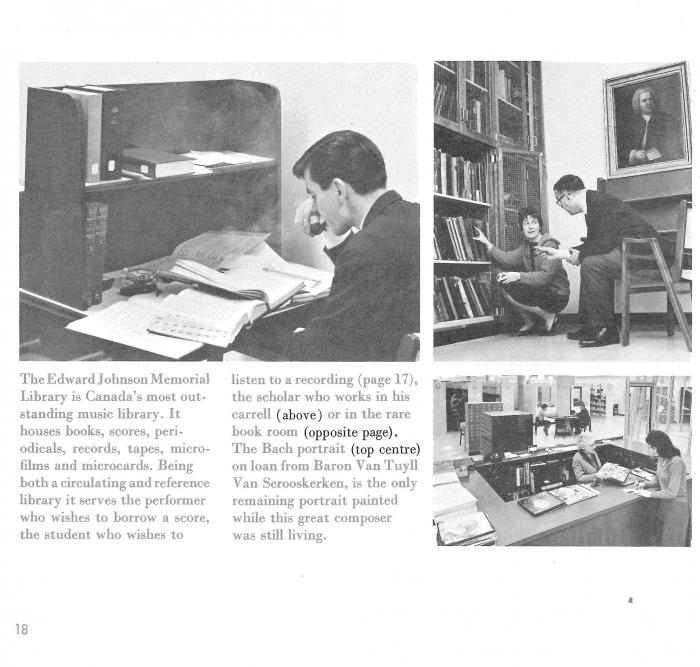 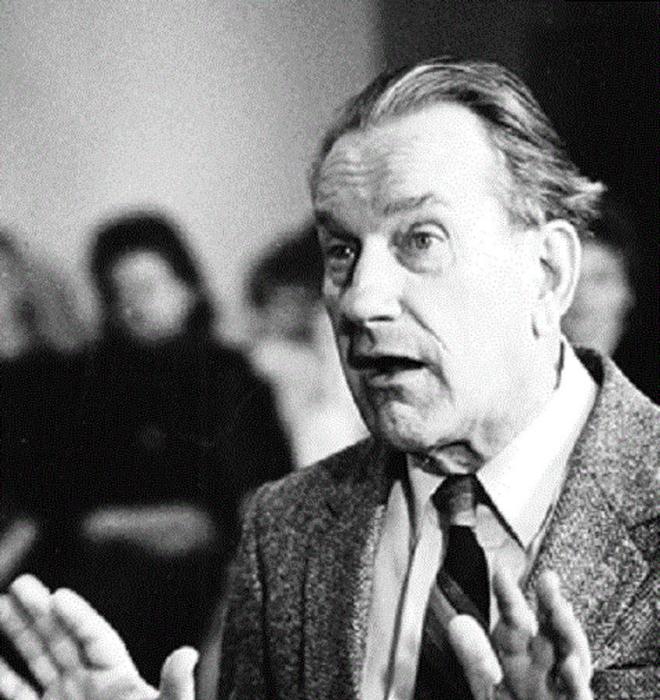 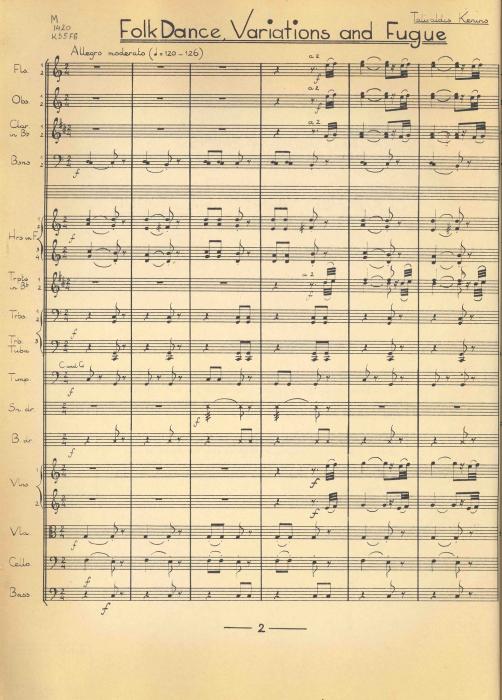 Born in Latvia, Talivaldis Kenins (1919-2008) came to Canada in 1951, and joined the Faculty of Music in 1952. Trained in France, he favoured traditional forms and a lyrical style, with a contrapuntal bent. His compositions include 8 symphonies and 12 concertos, including a concerto for 5 percussionists and orchestra composed for the University of Toronto Symphony Orchestra (1983). Kenins trained generations of UofT musicians in counterpoint, and would often play (and criticize, to hilarious effect) students' assignments for the entire class. His Folk Dance, Variations and Fugue (1964) was composed for an orchestra of young players (hence the M1420 call number). The Music Library's collection includes a recording by the London (Ontario) Youth Symphony Orchestra, conducted by James White.

In the library:
Score
Recording 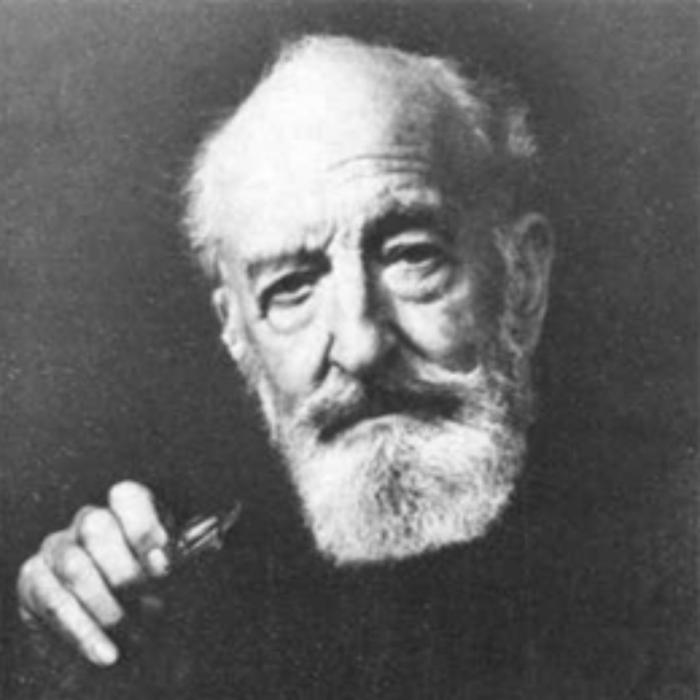 Charles Seeger (1886-1979) had a career of incredible breadth. He was an accomplished composer, critic, folklorist, musical philosopher, and musicologist. He was perhaps best known as one of the most influential thinkers in the field of ethnomusicology, although he confessed he did not like the term "ethnomusicology." On February 21, 1966, he came to the Faculty of Music to deliver the address "Ethnomusicology Revisited," in which he examined and challenged the fundamental concepts of the discipline, and the tensions between "musicology" and "ethnomusicology" in the academy.

The Music Library holds a recording of this lecture (Tape 835), which has been digitized and is awaiting processing, and eventually will be made available for streaming as part of our Faculty Events collection. 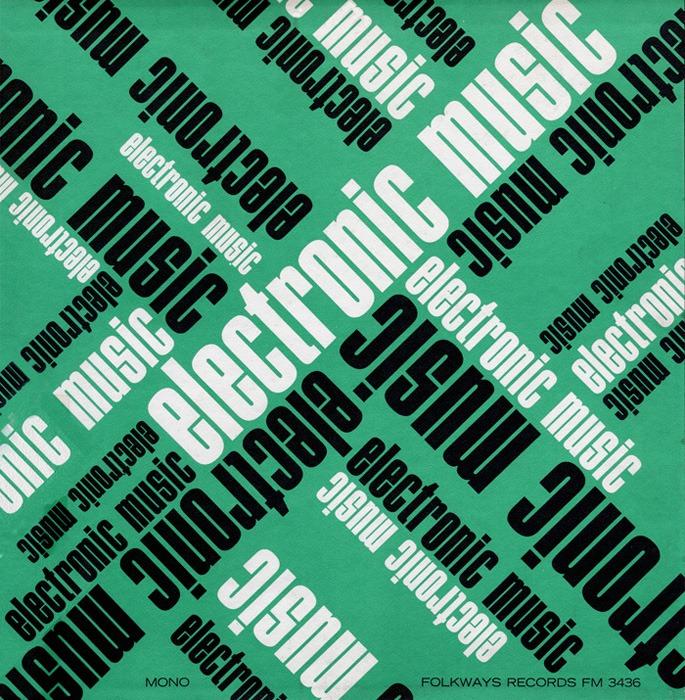 The Faculty of Music's Electronic Music Studio was established in 1959 by Arnold Walter and Myron Schaeffer. The Studio was renowned as one of the best in the world in the 1960s, and attracted many notable figures, including Hugh Le Caine, Pauline Oliveros, Gustav Ciamaga, Norma Beecroft, and Dennis Patrick. After Prof. Schaeffer's untimely death in 1965, the EMS was directed by Prof. Ciamaga. In 1967, Folkways Records released a recording of music created at the EMS, with works by, among others, Le Caine, Schaeffer, and Robert Aitken, plus a collaborative effort by Arnold Walter, Harvey Olnick, and Myron Schaeffer. The Music Library holds an LP copy of the recording, as well as the archives of Prof. Schaeffer. The recording is now available online via Music Online: Smithsonian Global Sound for Libraries.

An earlier post dealt with Prof. Robert Rosevear (1915-2012) and the creation of what was to become the University of Toronto Concert Band. As seen in the attached poster, in 1965 the Concert Band was open, by audition, to all University of Toronto students and staff. Some of the earliest recordings we have of Faculty of Music Ensembles are of the Concert Band in the 1960s. One of these is the concert of December 1, 1968 (Tapes 1146-1147). These were digitized in 2016 as part of a pilot project to investigate the feasibility of digitizing all of our archival audio holdings. Once these recordings have been restored, they will be made available for streaming as part of our Faculty Events collection. 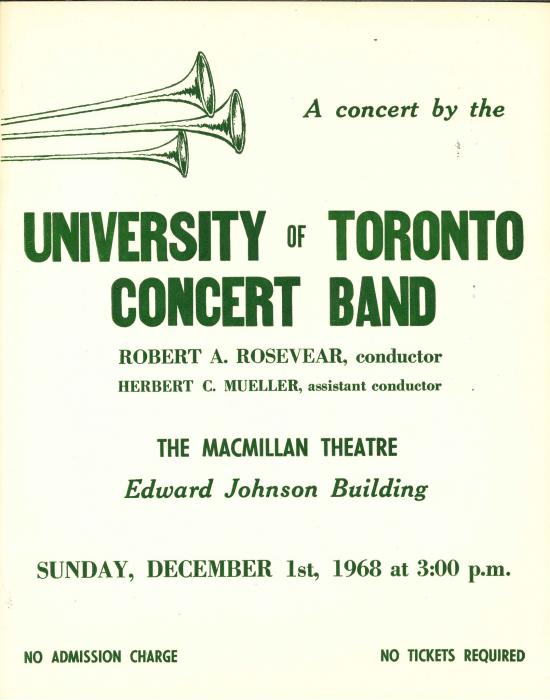 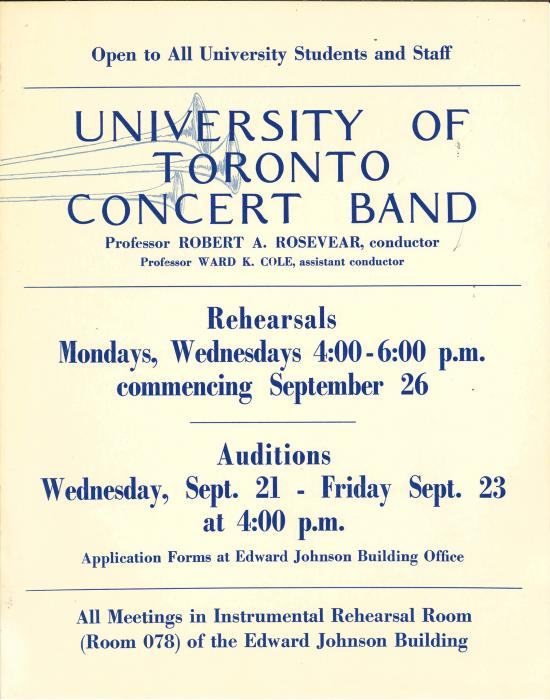 In the library:
Posters from the Faculty of Music collection
Faculty Events collection

In 1969 Prof. Andrew Hughes (1937-2013) and Margaret Bent published the first volume of their landmark edition of the early 15th century Old Hall Manuscript. The two scholars learned that they were both studying the manuscript, albeit from different perspectives, and decided to combine forces to produce the edition. Amazingly, they did not meet while working on the edition. Hughes had moved to North America for his teaching career, and Bent was in the UK; as a result, their collaboration was done entirely by correspondence. Hughes had a long and distinguished career at the University of Toronto, where he was famous for lecturing in his Oxford gown. He directed reenactments of medieval liturgies and liturgical dramas, most notably a reenactment of the coronation of Henry VI, and a 14th century Easter matins with two Resurrection dramas. Although principally a medievalist, Hughes also had an long-standing interest in representations of madness in music, especially in the 19th and 20th centuries. For a time he was also a nationally-ranked croquet player. 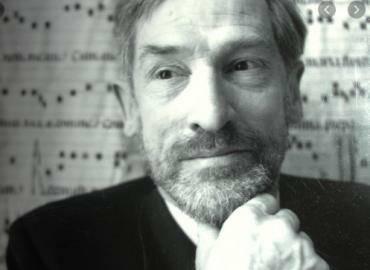 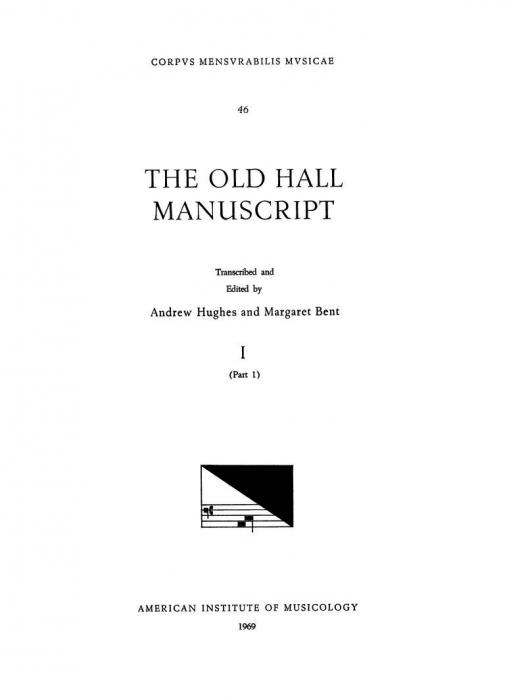 In the library:
Old Hall Manuscript
14th century Easter matins with the Harrowing of Hell and visit to the sepulcre (video at Media Commons)