The following items were selected and curated by Rebecca Shaw, Music Archivist. 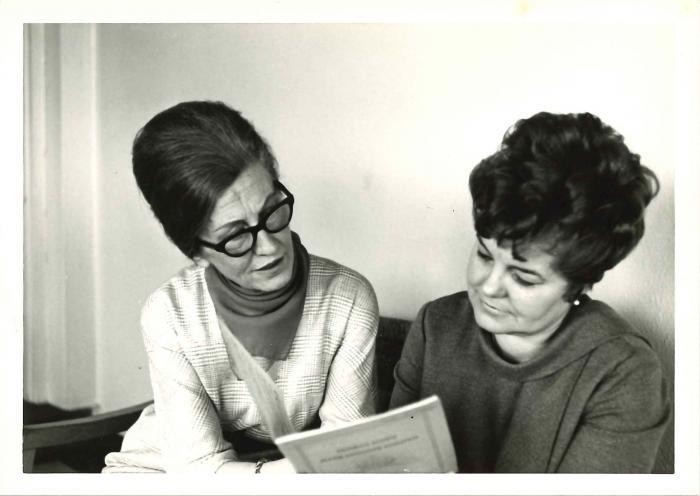 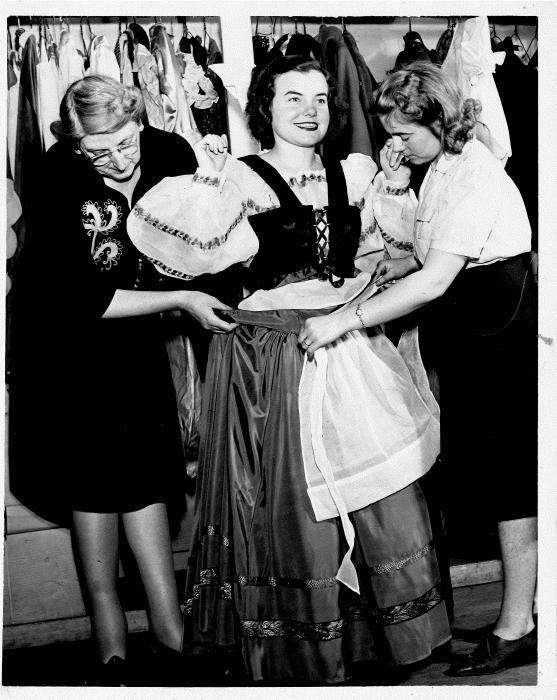 In 2001, the Estate if Greta Kraus Dentay released a CD of Elizabeth Benson-Guy's recordings from the 1950s, with Greta Kraus accompanying on harpsichord and piano.

Benson-Guy made her operatic debut in 1947 at the Royal Conservatory of Opera School as Marie in The Bartered Bride by Bedrich Smetana, and subsequently appeared in many CBC radio opera productions and song recitals, with the Opera Festival Association of Toronto, the Toronto Mendelssohn Choir, and the Festival Singers. She debuted at Carnegie Hall in New York on May 10, 1959, and at Wigmore Hall in London on October 31, 1967. She also taught at the Royal Conservatory of Music and the University of Toronto Faculty of Music (1969-1979).

You can explore her archives at the Music Library, including correspondence, photographs, programs, reviews, press notices. 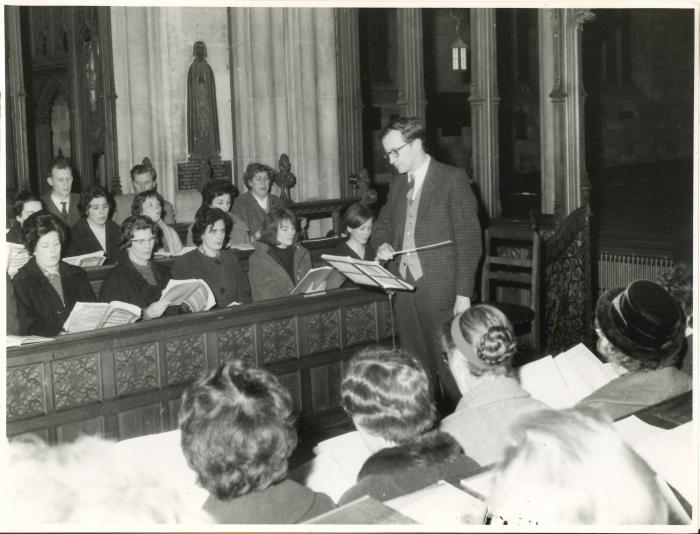 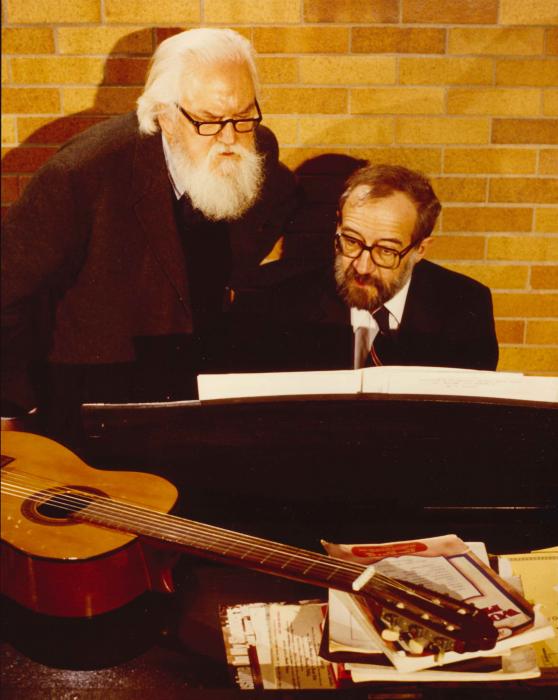 The University of Toronto Bulletin announcement read: "Holman is a noted choir director, composer and teacher. Numerous individuals and arts groups have commissioned his compositions and recordings of his work have met with significant critical acclaim. As a professor of composition for nearly 20 years, he was regarded as a passionate and inspiring teacher who drew students from other musical disciplines and who taught several prominent Canadian composers. As a choirmaster, he was mentor to countless young people in churches and in the Canadian Children's Opera Chorus."

In 2020, his complete archives were donated to the Music Library, including his manuscripts, recordings of his compositions and arrangements, and various other personal and professional papers.

Borrow scores and recordings at the Music Library 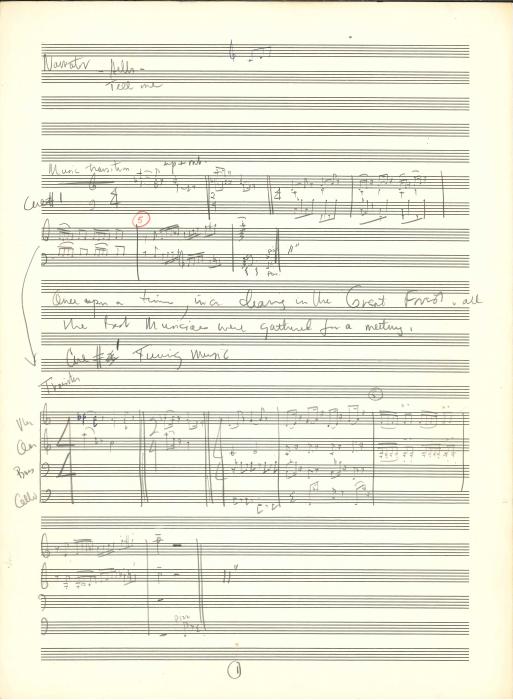 The Music Library holds the archives of professor emeritus Walter Buczynski, including manuscripts of his compositions, correspondence, and programs from performances of his music. Buczynski taught piano, theory, and composition at the University of Toronto Faculty of Music from 1969 until his retirement in 1999. His first donation to the archives was in 2003.

Borrow scores and recordings from the Music Library

Pictured:
An excerpt from one of his early manuscripts, "Mr. Rhinoceros and his Musicians," an opera for pre-school children for narrator, soprano, violin, violoncello, clarinet, bassoon, trombone and percussion. Libretto by Lilly Barnes. Music completed in Toronto on August 31, 1965.

For our 100 year anniversary, we are issuing 100 posts that highlight items from our collection. For their 26 year anniversary in 2004, the magazine Musicworks issued a series of 26 postcards featuring composers and compositions that appeared in their magazine issues.

Visit the library to see the complete set of postcards in our rare book collection.

Browse the complete run (to date) of Musicworks. 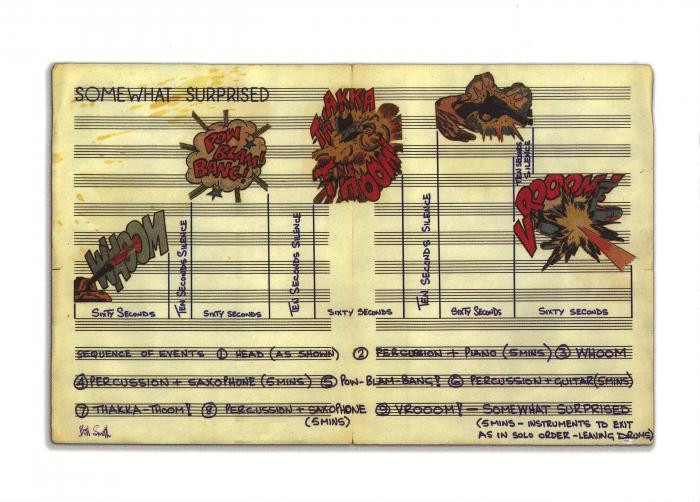 (2) Concerto for Flute and Offernkleide by R. Murray Schafer 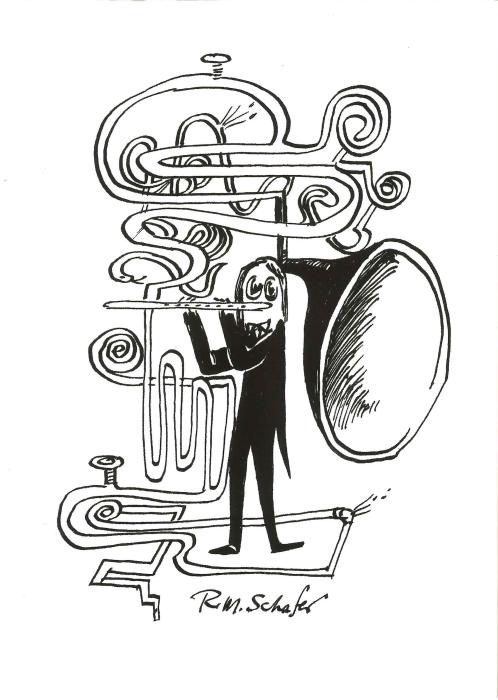 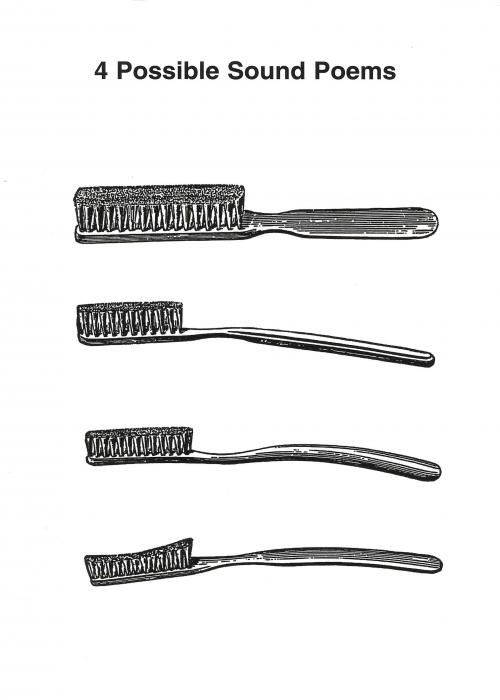 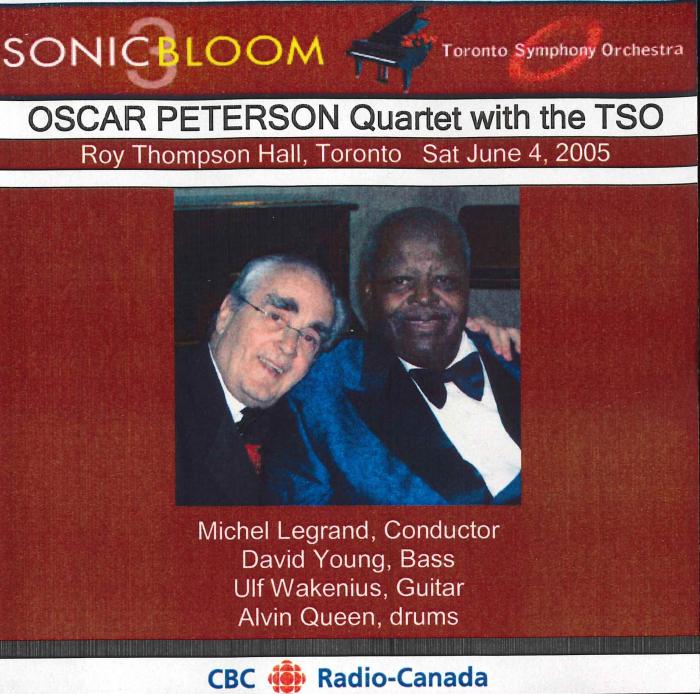 On June 4, 2005, the Oscar Peterson Quartet (David Young, bass ; Ulf Wakenius, guitar ; Alvin Queen, drums ; Oscar Peterson, piano) appeared in concert with the Toronto Symphony Orchestra, conducted by Michel Legrand. The concert was recorded for CBC broadcast, and you can borrow and listen to the recording at the Music Library. 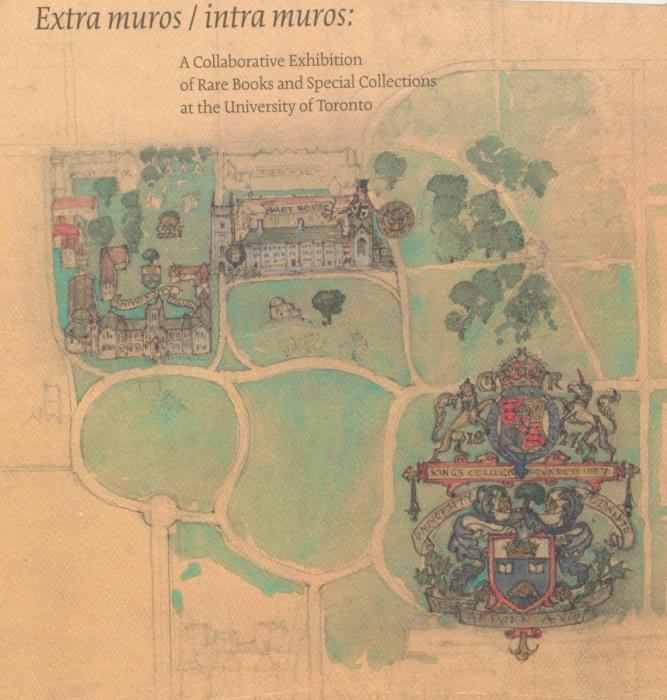 In 2006, the Music Library participated in a collaborative exhibition of rare books and special collections at the University of Toronto titled Extra muros, intra muros. For our selections, former chief librarian Kathleen McMorrow selected various items from our rare book collection. Among them were:

(3) Acis and Galate by Georg Frideric Handel (London: I. Walsh, 1743) - A "vigorously-used copy" previously in the collection of H.H. Langton (the University's chief librarian, 1892-1923) and his wife, Ethel Street, founding member of the Women's Musical Club of Toronto. See a complete digitized copy on Internet Archive.

(4) The Favourite Songs in the Opera call'd Il filosofo di campagna by Baldassare Galuppi (London: I. Walsh, [1761]) - An example of the passé-partout technique of printing title pages, in which a generic plate is used for multiple similar publications with a blank area for title information, to be added from a second plate or written in manuscript.

Visit the library to see our rare book collection or borrow the exhibit catalogue from the library. 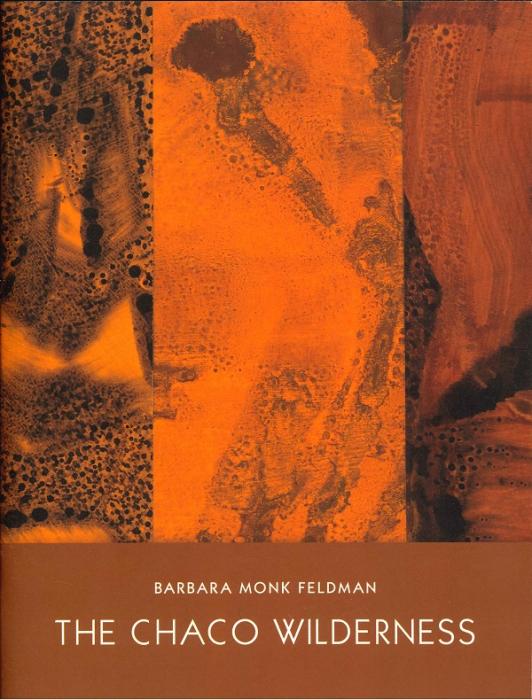 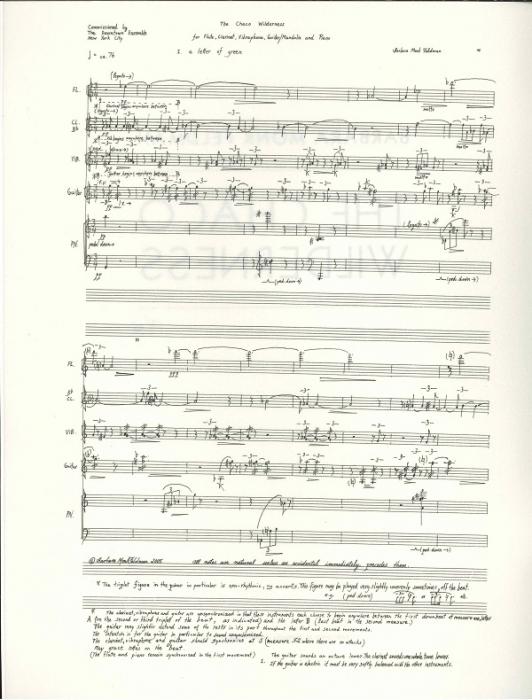 In 2007, Barbara Monk Feldman issued 56 bound copies, reproduced from the holograph, of The Chaco Wilderness (commissioned by The Downtown Ensemble, New York City and completed in 2005). We hold copy 12 in our rare book collection. Visit the Music Library to see the holograph score. 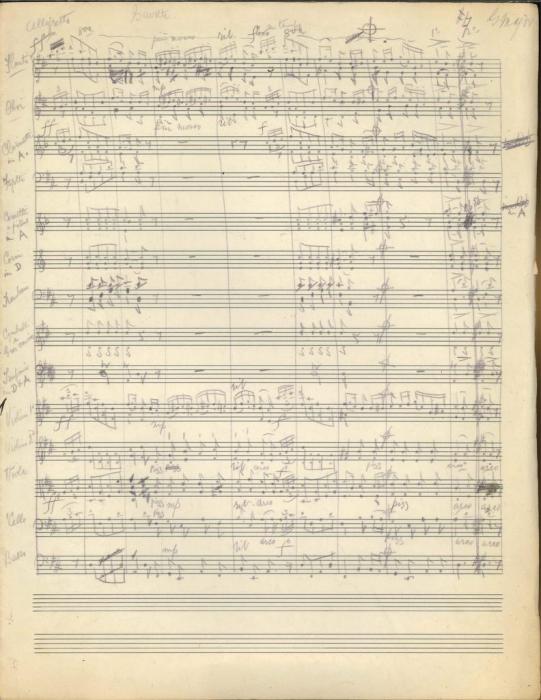 In 2008, we received the first of two donations that make up the J. Churchill Arlidge fonds at the Music Library.

Arlidge (1849-1913) was a flutist, organist, teacher, and composer who settled permanently in Toronto in 1885. He appeared as a performer with the Toronto Philharmonic Society, as an accompanist to various singers (including Emma Caldwell, Lilli Lehmann and Emma Albani), and was a founding member of the Toronto Flute Quartet. He also taught at the Toronto College of Music and the Toronto Conservatory of Music, before founding his own school, the Toronto Academy of Music, in 1902.

Arlidge's archival collection contains writings, family letters, photographs, various biographical documents, and manuscripts of Arlidge's original compositions, arrangements, and transcriptions of performed pieces. Many of his compositions and arrangements are now digitized and can be viewed online.

Pictured: Excerpt from one of Arlidge's original compositions, the Olivia Gavotte for orchestra. 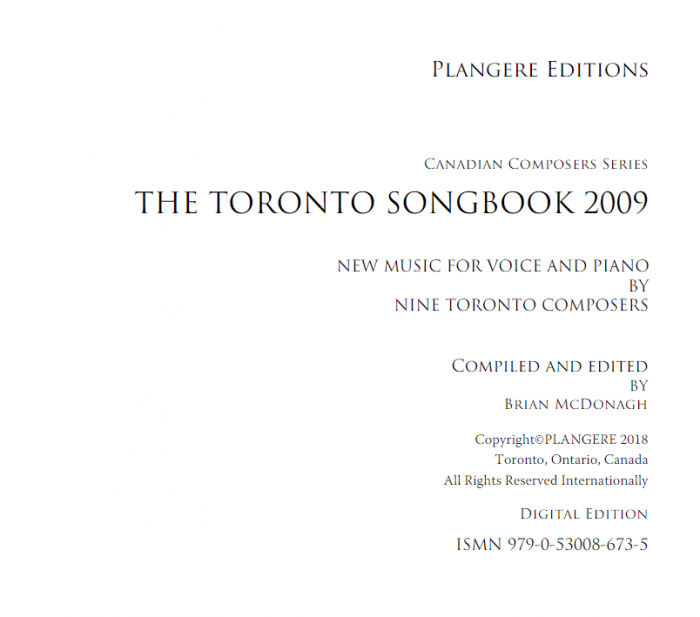 At the time, Plangere, a Canadian publisher of classical music, was a year old. The Toronto Songbook was published to celebrate the addition of their e-commerce retail website and national score distribution.

Borrow the Toronto Songbook from the Music Library.

Members of our U of T community can also explore digital scores of Plangere Editions online, including the Toronto Songbook. 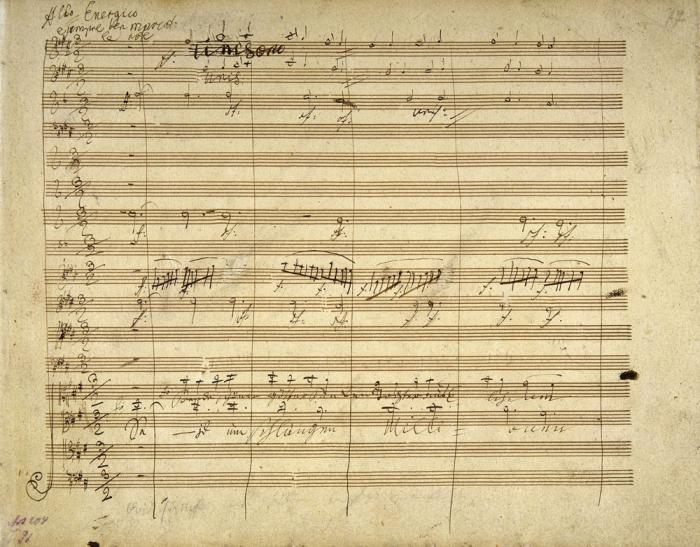 When the manuscript (among other items in Schindler's Beethoven collection) was sold to the Berlin Royal Library in 1846, several folios were missing. These ultimately ended up in the Bibliothèque Nationale in Paris and Beethoven-Haus in Bonn. Read the story of the manuscripts travels during Beethoven's lifetime and beyond in the commentary by Martina Rebmann that accompanies the facsimile.