The beat goes on: Children’s sensorimotor synchronization to music in a home paradigm

Do you ever find yourself moving together with your peers when you perform or listen to music? The regular beat found in most music is a great stimulus for synchronous movements—we start to automatically move together by following it. Try clapping along to the following excerpts:

Now, if you have a preschool-aged friend around, have them try the same activity. How did they do? For adults, it is often easy for us to clap or dance to music of varying tempos, which we call "sensorimotor synchronization". However, the window of tempos to which preschoolers can move accurately is comparatively narrow and expands as they grow. Beat alignment abilities develop over time—to some degree, it occurs over our entire lifespan.

Previously, research on children’s sensorimotor synchronization required participants to visit unfamiliar lab settings to work with experimenters who asked them to drum or tap to different kinds of music. At the TEMPO Lab, we questioned whether it would be possible to study this topic by looking at spontaneous behaviours children exhibit like dancing (Kragness et al., 2022). Recently, we used a relatively unconstrained task to explore the influences of groove—how much a particular piece of music induces a desire to move (Madison, 2011)—on children’s development of sensorimotor synchronization. Young children (3-7 years old) were asked to freely dance in the comfort of their own homes to 4 musical excerpts rated as either low or high groove (Janata et al., 2012). Their parents video recorded their responses and sent us the videos for analysis. How do you think groovy music influenced children’s dancing? We found that on average, high groove music encouraged more dancing (and with more energy) from children. More importantly, groovy music also allowed children to dance better; in technical terms, the tempo of their movement better matched the music's tempo when they were listening to music with a groovy beat.

While some children were great dancers, others had room to improve. We wondered whether the same kids who are good dancers also perform better at more traditional sensorimotor tasks, like drumming. Just about one year later, participants from the dance study were invited to be the drummer for our "TEMPO Band" in an experiment we called "the Marching Band Game". Their responsibility was to tap along to the steady beat (on their laptop frame, see image below) presented in the music that was being played so that the band could stay together. They were asked to synchronize their taps to the same four instrumental excerpts that they previously danced to, as well as to woodblock excerpts corresponding to the beat track of each excerpt. We expected that older children would be able to align to the beat more closely and that those who were good dancers would also be good tappers.

So far, we have analyzed a preliminary sample of 7 children to look for patterns in their beat alignment abilities. First, we asked: how aligned were their taps to the beat? We examined participants’ mean asynchrony which represents the location of their tap in time compared to the beat of the music. Asynchronies at 0 imply they are tapping on the beat. A negative asynchrony indicates they are anticipating the beat (tapping “ahead”), and a positive asynchrony indicates they are reacting to the beat (tapping “behind”). We observed the classic hallmark of human beat alignment: anticipation. The average mean asynchrony was negative, indicating that the participants, like adults in previous studies (Aschersleben, 2002; Wiltermuth and Heath, 2009), tended to anticipate the beat rather than react to it. Interestingly, correlations with age indicated that younger children tended to react to the beat (positive asynchrony) while older children, like adults, tended to anticipate the beat (negative asynchrony). Similarly, younger children’s tapping was less consistent than older children’s.

A comparison between music and woodblock trials showed that acoustic features appeared to influence tapping: children tapped closer to the beat and more consistently when tapping to the woodblock than the music. However, anticipation was more prominent in music trials than woodblock trials.

It’s important to note that these figures only represent the first few participants, and have not yet been evaluated statistically. Still, the results so far suggest that both age and acoustic information affect tapping ability. Once the full set of data has been collected, we will confirm the trends we have reported here. We will also examine effects of tempo and groove on children’s tapping ability, and finally, investigate whether “better dancers” in our lab's previous study are also better tappers.

A very promising feature of this study is that we were able to test children's sensorimotor synchronization in the comfort of their own homes using technologies that are found in most North American homes. On one hand, this made it more accessible for participants to complete the study. On the other hand, it led to uncontrolled circumstances that may have influenced our data. For example, we were unable to control for:

Nevertheless, the children seemed to enjoy the task, the gamified aspects of the experiment and were proud of their contributions towards the scientific field.

Despite those limitations, the at home method to studying beat alignment is still effective at revealing age and stimuli evoked differences. Future work can build on this method to answer more questions related to children’s sensorimotor abilities. For example, how do socio-cultural differences, music and dance training, musical emotions, acoustic features, or tempo influence children's beat synchronization? Our hope is that this gamified home experiment method will enable more opportunities to conduct experiments exploring the unknowns of beat synchronization development in humans. 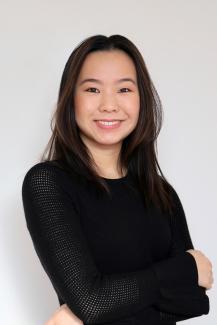 Catherine Tan is an undergraduate student majoring in Music Education and minoring in Psychology at the University of Toronto. Upon her anticipated graduation in 2023, she hopes to continue to explore her interests in education, music cognition and musics’ influence on wellbeing. Beyond her studies, she enjoys performing and teaching music, baking and traveling.

Catherine recently won first place in the Faculty of Music Undergraduate Research Showcase (FOMURS 2022) for her poster entitled "The beat goes on: children’s sensorimotor synchronization to music in a home paradigm" (see her poster).

Congratulations to everyone who participated in the Showcase and stay tuned for future blog posts from other participants!