Introduction to the Victor Zuckerkandl Index

For several years now, I’ve been exploring the writings of musicologist and philosopher Victor Zuckerkandl (1896-1965) against the backdrop of historical movements in music theory, Western esotericism, and public scholarship. In the 1930s, Zuckerkandl worked as a conductor and music critic in Vienna and Berlin, then in the ‘40s through mid-‘60s he taught music at several colleges in the United States. Zuckerkandl is best known to English-language audiences for The Sense of Music, a pedagogical text, and the two-volume Sound and Symbol, which “aims to show that the study of music … [can elucidate] basic philosophical problems, especially those of time and motion” (Blair 1958). One of the things I find fascinating about Zuckerkandl is that he wrote almost exclusively for general audiences: the interested public, liberal arts students, and professionals in other fields, all of whom had little to no formal musical training.

Zuckerkandl left behind numerous unpublished draft manuscripts and items of correspondence, held at the Greenfield Library, St John’s College in Annapolis, Maryland; the Eranos Foundation in Ascona, Switzerland; and the Austrian National Library in Vienna. Over two summers, I traveled to these sites to view their archival holdings and eventually found myself with thousands of files. The Victor Zuckerkandl Index (VZI) consolidates these documentary materials into a publicly accessible and searchable database.

Alexis Millares Thomson, Tegan Ridge, and Emma Soldaat, graduate students at the University of Toronto, were instrumental in the creation of the VZI. In this first of two blog posts, they will outline the structure and search features of the Index. In the second post, Emma, Alexis, and Tegan offer a glimpse of how they worked together as a team and some of the fun challenges they encountered while working with archival materials.

Structure, content, and features of the Victor Zuckerkandl Index

The VZI is part of Discover Archives, the University of Toronto's online portal for archival holdings. The Index provides rich descriptions of archival materials related to Zuckerkandl, as well as links between related unpublished documents and published materials. There are more than 200 items in the index (211, to be exact!), covering over 1700 pages of material. Our team aimed to include thorough and concise summaries of each of the 200+ items. We wanted users to be able to grasp the content and context of an item without necessarily having the item before them. This is what makes the VZI unique: it offers a picture of Zuckerkandl’s life and ideas through snapshots of conversations and sketches of essays—all while being accessible from around the world.

The items are sorted into four series based on the nature of the documents: Correspondence, Manuscripts, Reader’s Reports, and Miscellanea. 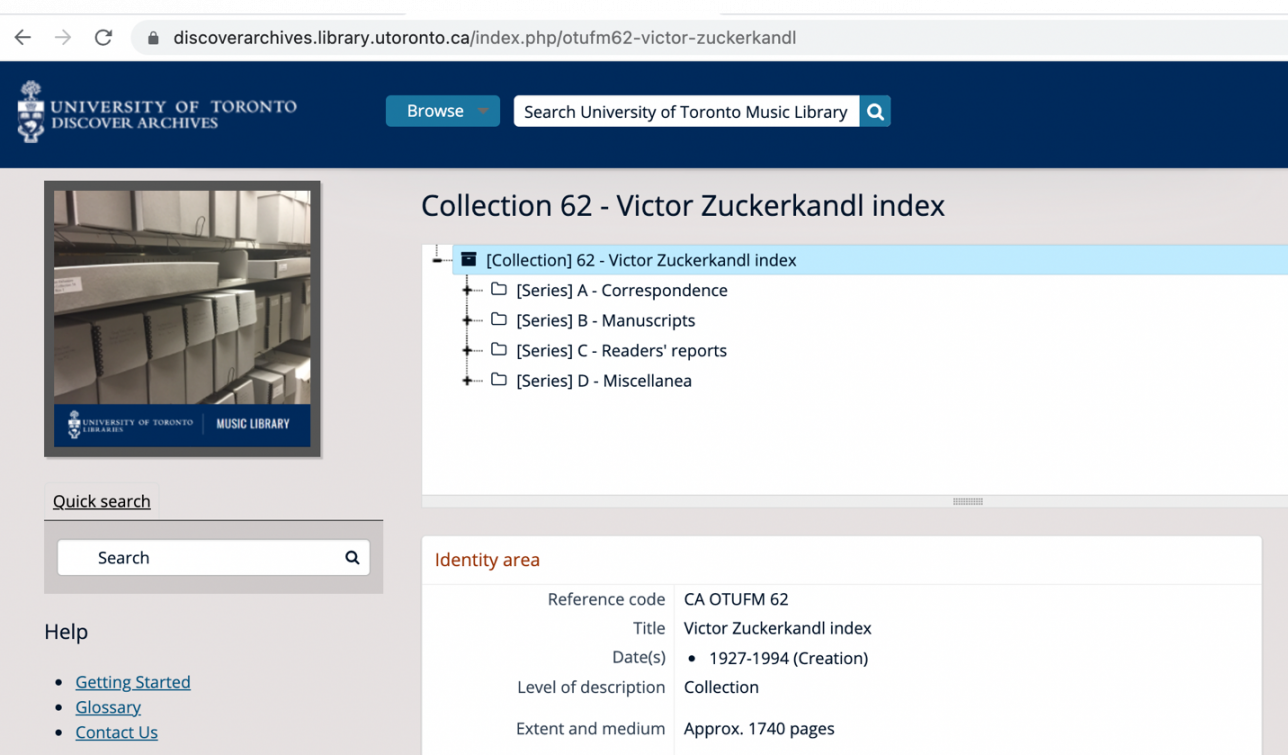 Each item contains some key information within the Discover Archives interface. Here is a quick guide to help you navigate the index: 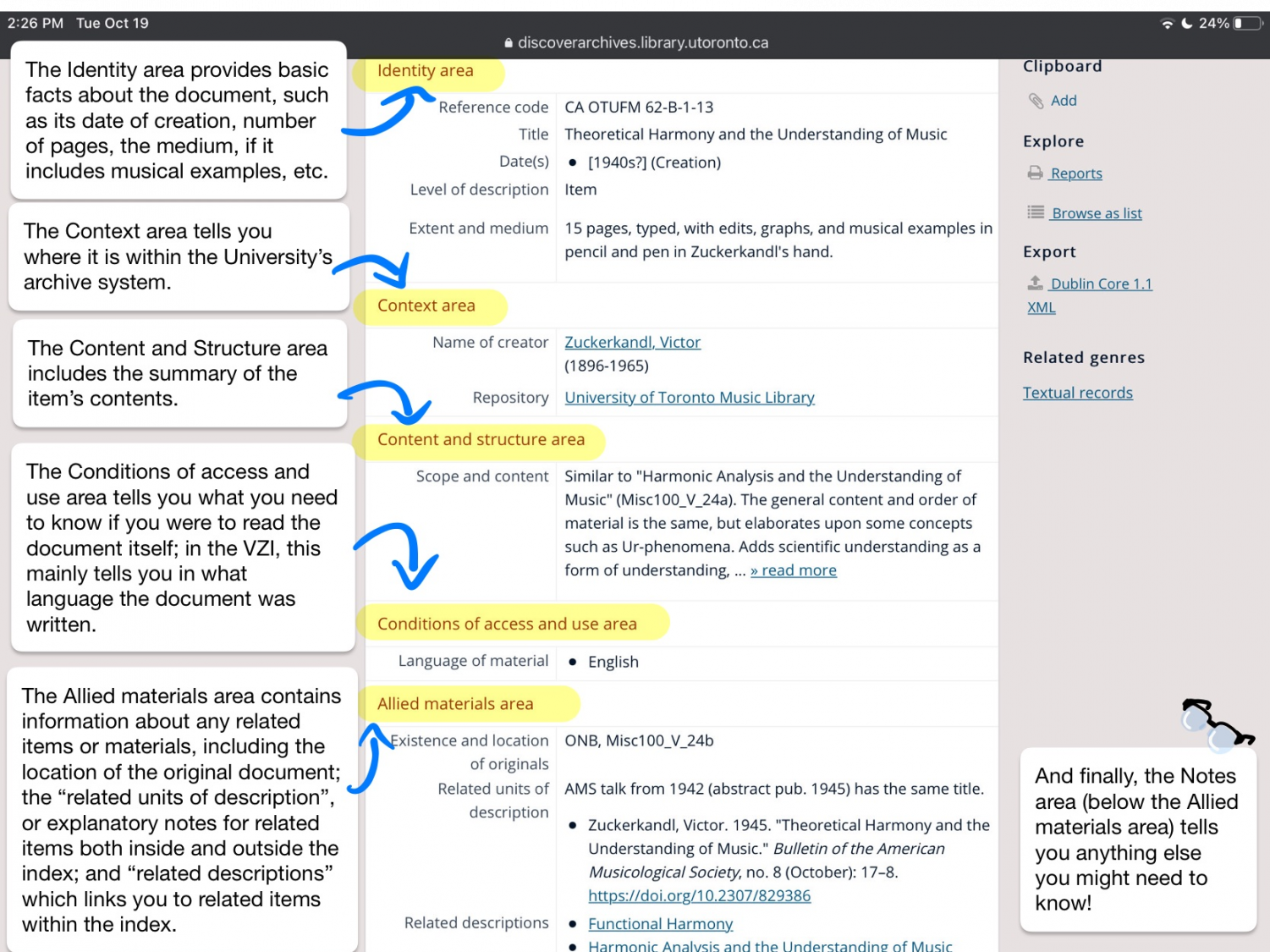 The VZI is for researchers with all levels of interest in Zuckerkandl or in associated topics and people in his circle. Curious casual users can browse the VZI by clicking on items in the drop-down menus on the home page or by following links in the “Allied materials area.” Researchers with a predetermined area of focus can use the quick search feature to carry out keyword searches.

Let’s start by looking at an example of the Allied materials area. The example below is from the entry on “Der singende und der sprechende Mensch,” a draft manuscript held at St. John’s (CA OTUFM 62-B-1-35). As the citations indicate, the final version was published three times: in Die neue Rundschau (1961), in the Eranos-Jahrbuch (lecture delivered 1961, published in 1962), and finally in Zuckerkandl’s essay collection, Vom musikalischen Denken (1964). A researcher could easily copy+paste the citations into WorldCat or their institution’s library catalogue to find these published versions near them. 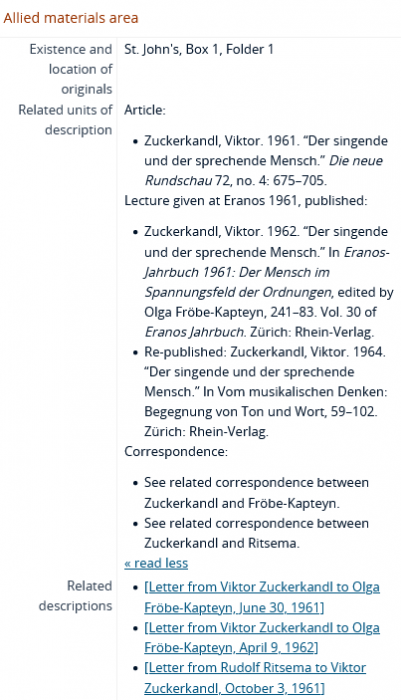 Below the citations of published materials are links to related items in the VZI. In this case, the links in Related Descriptions lead to correspondence with Olga Fröbe-Kapteyn, the founder of the Eranos Conferences, and Rudolf Ritsema, the organization’s president at the time. Clicking through the links reveals that Zuckerkandl suggested Fröbe-Kapteyn pick up a copy of Die neue Rundschau.

As mentioned, the VZI also has a “quick search” feature. Users can enter keywords, Boolean operators such as AND and OR, conduct wildcard and truncated searches, and so on. As a quick example, let’s imagine a scenario: A researcher is interested in finding out what Zuckerkandl may have written about Bach’s music. The researcher could enter the truncated search term “Bach*,” and in the drop-down menu underneath the search bar, they would find all the items that include variants of the word “Bach”—Bach’sche, Bachian, Bach’s, Bachs… 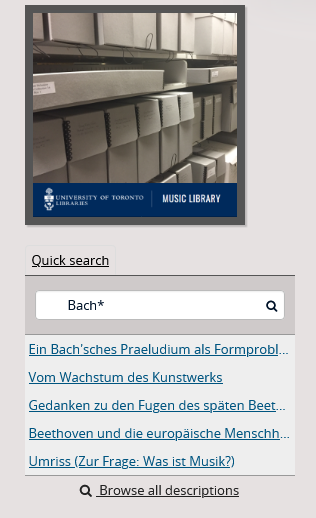 Note that “Bach” only appears in the title of one item, “Ein Bach’sches Praeludium als Formproblem” (“A Bach Prelude as a Problem of Form”). “Bach*” is pulled from other areas, primarily the “Content and structure area.”

A major step during collaborative editing was to establish internal linking between related items of correspondence; these allow the user to follow conversations, sometimes across the span of several years or among multiple correspondents. We chose to highlight exchanges that discussed preparations for the Eranos conferences, as well as conversations dealing with preparing, editing, and publishing Zuckerkandl’s work. Below is an example of a letter from Rudolf Ritsema to Zuckerkandl (CA OTUFM 62-A-069), which is the beginning of a longer chain of letters and also related to a manuscript described in Series B. 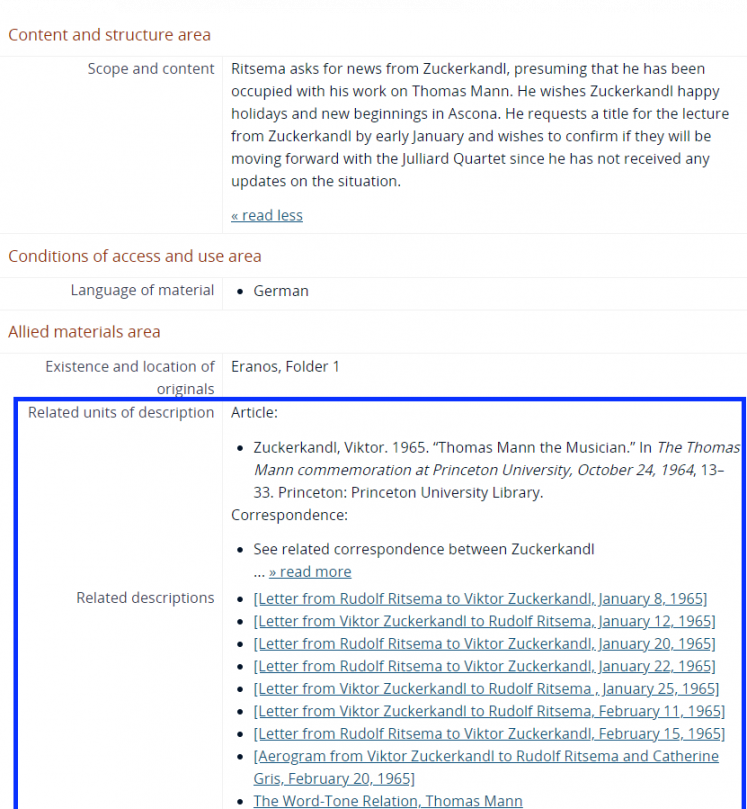 The correspondence items provide insight not only into Zuckerkandl’s professional and academic activities but also his personality and relationships to important people in his life, primarily Ritsema and Fröbe-Kapteyn. We see how dedicated Zuckerkandl was to his work and the sincere enthusiasm he felt each time participating at Eranos, the anxieties he faced when preparing for conferences or publications, and his growing eagerness to live and work in Ascona full time towards the end of his life. In the next example (CA OTUFM 62-A-032), Zuckerkandl’s letter to Fröbe-Kapteyn expresses the importance that the Eranos circle held for him, as he begins planning for his final relocation to Europe. This letter also includes details that might not be apparent from published lectures or conference proceedings alone, such as Zuckerkandl’s inspirations for his 1962 lecture and behind-the-scenes aspects of conference planning. 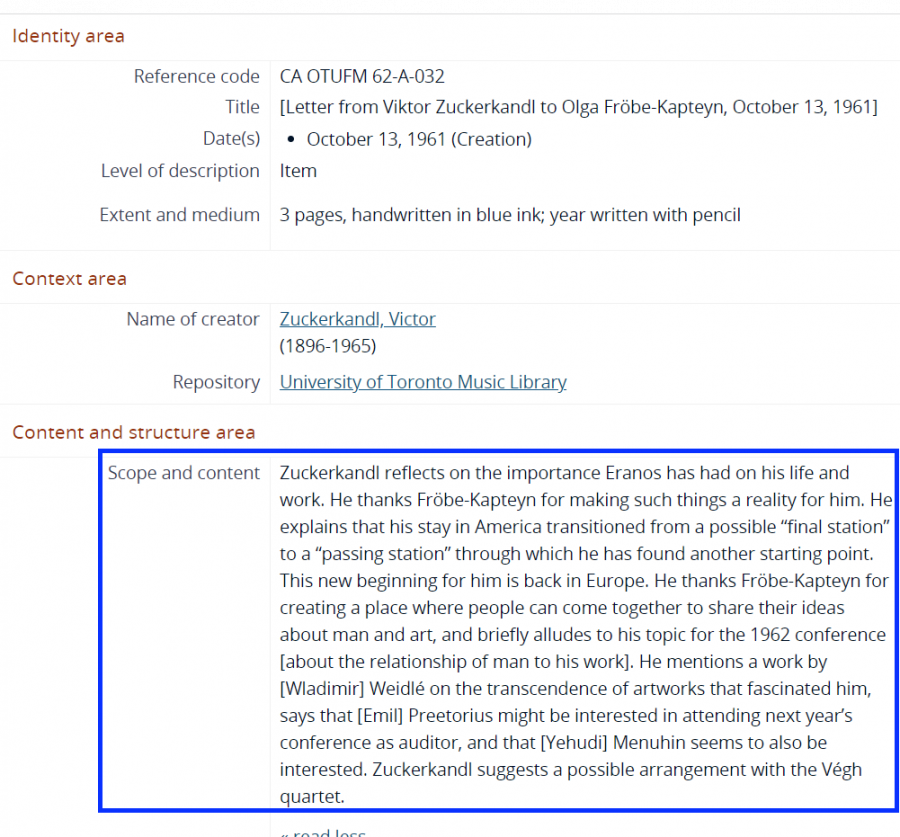 And in this final example (CA OTUFM 62-A-037), we see that Zuckerkandl (like many of us) had difficulty selecting a title for his paper, instead asking his friend Fröbe-Katelyn to choose the title for him! 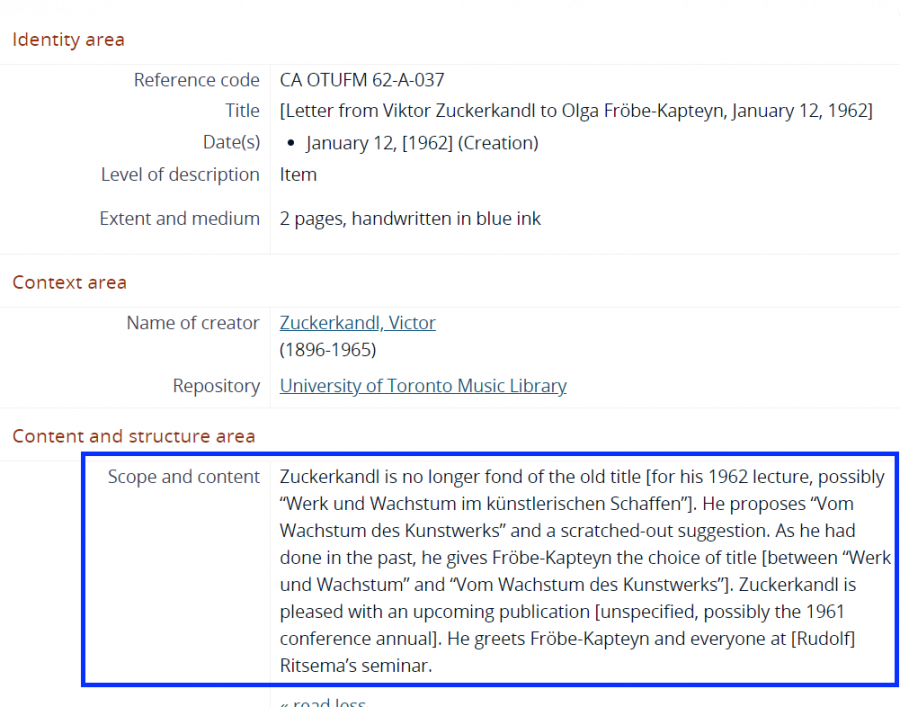