Love and War: The Sound World of Othmar Schoeck's Penthesilea

Today's blog post is brought to you by Tegan Ridge, a Bachelor of Arts student at the University of Toronto. The work presented here would have been part of this year's Faculty of Music Undergraduate Research Showcase. Tegan recently received a 2020 University of Toronto Libraries Patricia and Peter Shannon Wilson Undergraduate Research Prize for her work in TMU449 (Music Theory Independent Study). See this online feature of her award-winning work. Congratulations, Tegan!

Love and War: The Sound World of Othmar Schoeck’s Penthesilea

My name is Tegan Ridge, and I’m thrilled to share my research with you. Last semester, I investigated Othmar Schoeck’s 1927 music drama, Penthesilea, a setting of Heinrich von Kleist’s 1808 play of the same name. In Schoeck’s work, the love-mad Amazonian Queen, Penthesilea, has fallen for the famed demigod Achilles. She demonstrates her amorous intent through her reckless and relentless pursuit of him on the battlefields of Troy. Penthesilea teeters between love and bloodlust. 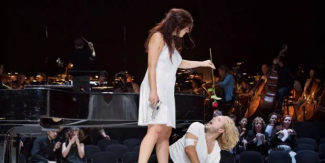 Penthesilea occupies a curious place in Schoeck’s body of work. The composer, who was known for his Romantic compositional style, also uses modernist techniques in this music drama. Literary scholar Amy Emm describes these two approaches as “romantic lyricism” and an “abrasive style”; she suggests that the juxtaposition of the Romantic and the modern generates musical and dramatic tension (Emm 2013, 318). Inspired by her claim, I decided to look more closely at these contrasting styles.

The more modern of the two styles, which I dub the war style, dominates the opera; it employs twentieth-century instrumentation and post-tonal compositional techniques, such as polytonality and disjunct melodic contours. Its complement, the love style, makes use of late Romantic string-based instrumentation, more familiar tertian chords, and smoother melodies. By alternating between the two, Schoeck allows us a means of understanding the characters’ emotional and psychological state (Hinrichsen 2002, 289-291). The love style is used to represent ‘softer’ emotions such as love and friendship, the war style to underscore bloodlust and violence. Penthesilea in particular swings between these two extremes; the music often reflects her conflicting emotions.

In order to see how these two styles may have developed, I turned to biographical materials. I found that behind the complex sound world of Penthesilea lies a remarkably simple approach grounded in embodied musical experience. Specifically, anecdotal evidence in biographer Chris Walton’s book suggests “[t]he music of Penthesilea [was] probably […] conceived ‘manually’ – in other words, its textures and spacings reflect the lie of the hands, fingers, and thumbs on the keyboard.” (Walton 2009, 152).

Further to this, Schoeck himself claimed that “[…] the real melody [in Penthesilea] is formed by Kleist’s words. The music gives them no more than harmony and rhythm.” (Schoeck in Walton 2009, 132). Schoeck likely generated harmonies at the piano; he manipulated tertian chords until he found an appropriately pleasing or, as Emm would phrase it, an “abrasive” collection of pitches. He then used this collection as framework for setting instrumental and vocal lines.

I found it therefore helpful to approach the sound world of Penthesilea as Schoeck did, as transformations of chords that fit under the hands conveniently at the keyboard. This compositional process results in musical ‘areas’ of tightly related pitch materials that coincide with narrative content.

As an example, let’s discuss Penthesilea’s entrance. We’ll focus our efforts on Schoeck’s use of the war style. You can listen to this scene on Naxos. The perspective I adopt here is informed by transformational (Lewin 1987) and neo-Riemannian approaches (Cohn 1998). These approaches examine how chords are manipulated to produce new sonorities, for example, how an A♭ triad becomes an Am chord. 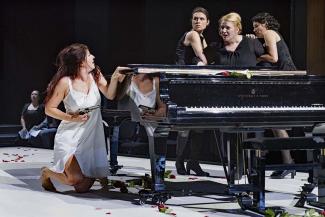 Penthesilea (Dshamilja Kaiser) crouches behind a piano as her friend Prothoe (Aile Asszonyi) is restrained by two members of the Amazon army (ensemble of the Theater Bonn). Photograph by Thilo Beau, 2017.

Penthesilea slowly enters from stage right and, enraged, calls for her army to ‘tear Achilles limb from limb’. The Amazon soldiers question her commands. Written in the war style, the ominous sounds of battle are invoked by the orchestra; its brassy, percussive accompaniment is reminiscent of pounding war drums.

Let’s explore the first statement of the polychord pedal, shown in Example 1: 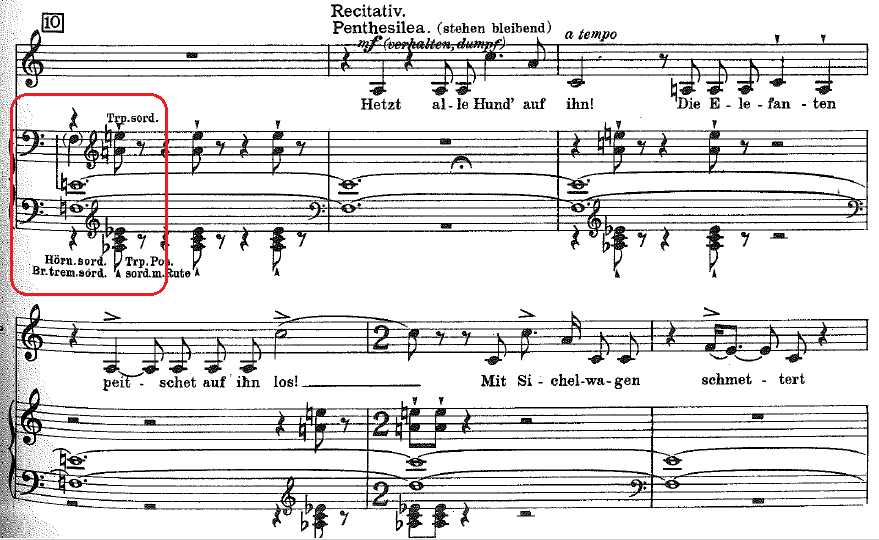 The first harmonic idea: the polychord pedal. Note that Penthesilea’s line prioritizes pitches A and C from the polychord.

Here, Schoeck creates a polychord of Fm7 and FM7, two seventh chords which we can consider to be transformations of each other. F, the root, and E, the seventh of the FM7, act as an anchoring pedal. Over top of this, Schoeck employs a slide-like transformation. Pitches {A A♭,E♭} move by half-step to pitches {A,E} (or vice versa):

The polychord pedal. I first play the polychord in its entirety, then I demonstrate the slide motion from {A♭,E♭} to {A,E} in the LH. Compare this to the video of the semitone slide. 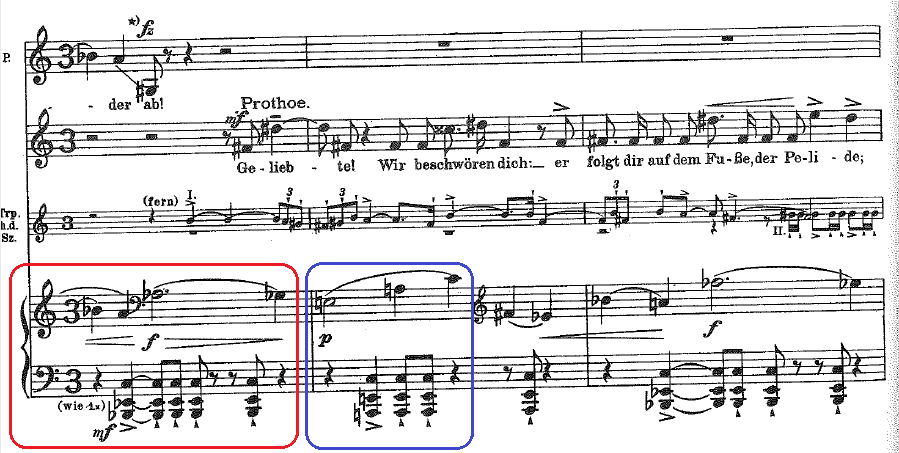 The second harmonic idea: the semitone slide. The melody in the orchestral line is played by the clarinet; note that it plays a broken A♭9 and Am. Similar to Penthesilea’s lines in Example 1, Prothoe’s vocal part is centred around two pitches: F# and D# (G♭ and E♭) from the A♭9.

While certainly non-functional, the part writing in the example again underscores how tidily this—to use Walton’s wording—‘manually’ fits under the hand. C remains constant, played by the thumb in the LH; the bottom two pitches adopt a slide-like transformation again, moving by semitone, E♭ → E, B♭ → A:

The semitone slide. I first play the orchestra’s stack, the bottom 3 pitches of the A♭9, then slide to Am. It’s a bit of a stretch for me, but Schoeck had massive hands.

Notice how aurally similar the exaggerated slides sound! This is due to the presence of common tones. Schoeck uses CTs to create a sense of unity between seemingly disparate ideas. In fact, these two harmonic ideas are treated as a unit; they are repeated and then transposed twice, first by a tritone, then a second. This sequence can be described as the following: 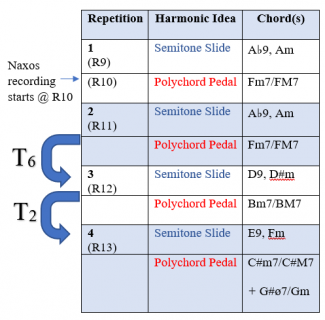 Suddenly, Penthesilea has a change of heart and becomes despondent; this ushers in the first Romantic section. The music drops in tempo, register, and volume. The accompaniment produces sustained chords; the drums of war have vanished. This new passage employs C pitch centricity, which Schoeck prepares us for at the boundary between these two sections:

The boundary between the sections. Note that the Romantic passage makes use of a new, “wider” tempo, the dynamic markings drop from fortissimo to pianissimo, and Penthesilea’s vocal line employs a narrower range.

In the final chord of the war section, Schoeck uses the seventh voicing seen in Example 1, this time pairing it with a minor triad to construct a G#ø7/Gm polychord, shown in purple. Note that within this polychord lies not only Gm, but also G, which appears explicitly in the RH of the piano reduction at R14. The embedded G Major/Minor is the modally ambiguous ‘dominant’ of the new centre; by placing it within the final chord of the war section, Schoeck softens the transition to C-centricity.

This approach, an examination of harmonic materials in close relation to the text, provides a way of understanding the emotional and psychological state of the characters in Penthesilea. It became clear to me that Schoeck was unconcerned with adherence to operatic formal conventions. There are no singable melodies or charming dances in Penthesilea. Instead, I found a kaleidoscopic exploration of harmonic colour and compositional style, befitting our protagonist’s explosively conflicted psyche.

I’d like to thank Professor John Noyes for guiding my reading of Kleist’s text, Elizabeth Robinson for guiding the tone of this blog, and Dr. Daphne Tan for her advice regarding theoretical approaches.