This is the second of two blog posts about the Victor Zuckerkandl Index (VZI). Check out our first blog post!

Our work on the VZI began in 2019. Each RA was assigned an archival site (St. John’s College, the Austrian National Library, and the Eranos Foundation) and was responsible for summarizing the items it held. With the help of James Mason, Music Library Technical Services Librarian, each of us compiled our summaries into spreadsheets with headings corresponding to Discover Archives data fields.

Our next step was to check each other’s spreadsheets for related items, grouping them together with colour (in the above example, the bright blue rows have related content). This work helped to form the “related descriptions” section of the final index. Once we finalized this colour coding, Rebecca Shaw, Music Archivist, took the information that we had compiled and created the index itself on the Discover Archives platform.

Discover Archives is a multi-repository database at the University of Toronto that contains descriptions of material held at various archives at the university and its federated colleges, including the Music Library's archival collections. To learn more about the database, see the "Getting Started" page, or contact Rebecca (r.shaw@utoronto.ca).

Now the collaborative work began in earnest! We had to make sure that the content that we had created individually was both accurate and consistent across archival sites. Over spring and summer 2021, we had Zoom meetings to discuss our editing policies and collectively wrote a series of Word documents on OneDrive that became the basis for the final VZI. 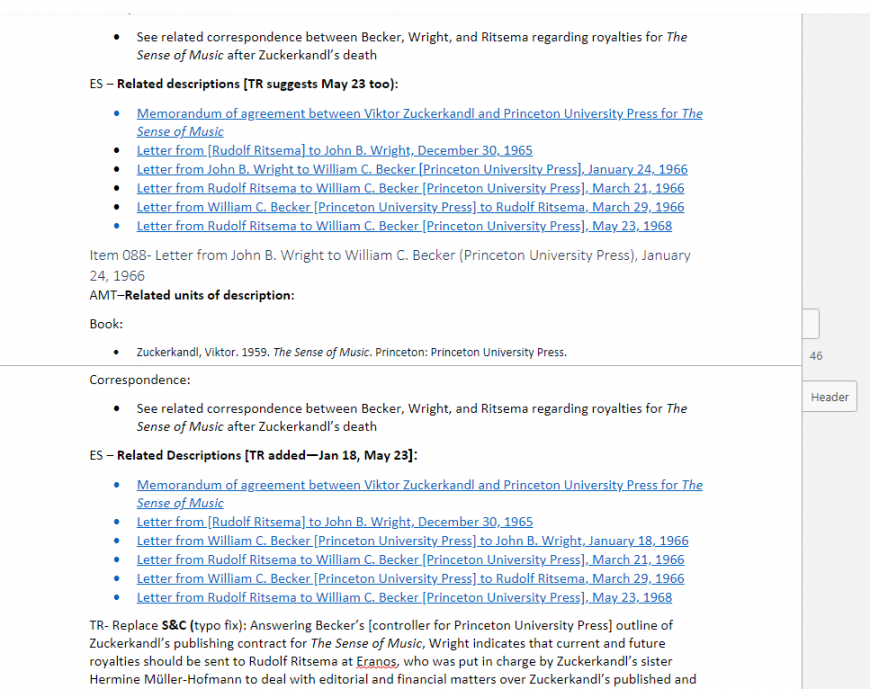 Archivists at the three sites had organized Zuckerkandl’s materials into physical folders and created itemized lists for these folders. Our team expanded on this work by filling in missing pieces of information. Notably, we offer approximate dates for multiple undated items, creating a revised chronology of Zuckerkandl’s life and work. We accomplished this by pursuing context clues, such as looking for continuity between letters and tracing references to external sources. We cross-referenced conversations on working papers with the known dates of delivered lectures. And we tracked the insertion of hand-written comments between versions.

Furthermore, by following Zuckerkandl’s hand-written edits, we were able to determine which of the English drafts at St. John’s was written first. In the last paragraph of the first page, one can see that the words “every sculpture” are typed over a swooping line indicating where they were to be inserted.

And the phrase is indeed present in that location in the second version.

The German version (below), however, is not an exact translation of the English versions. The second sentence begins akin to the English, then quickly veers down a different path; nevertheless, the German and English versions are conceptually related, with the idea that art can refer to objects either in the physical or the psychical world; Zuckerkandl’s parenthetical reference to “non-objective” art in the English version corresponds to “ungegenständliche Kunst” (or nonrepresentational art) in the German version. We thus cannot fully determine if the German version was written in preparation for the 1955 lecture before being translated into English, or after 1955, for the published German-language essay “Mimesis.”

Translation: Nobody can deny that each work of visual art recognizably represents an object, and thus in this sense imitates it, [no matter if] the object is immediately obtained from external experience or abstracted through a [mental] process. (Our term “non-objective art” is misleading; spatial forms and colours are most certainly objects [of the imagination]; how else could there be theories of form and colour?) […]

Translation: I am sending a few pages which could be useful in case you wanted to take up the suggestion [made in Pr.? and] recommend me for the Ascona Conference [of] 1957.

Since I do not know which theme would best fit within the framework of next year’s conference, I think the most reasonable [course of action is to] summarize the entirety of the work [whilst paying] particular attention to the problems in which you are especially interested. [Doing so gives] one a certain amount of room to play when later [refining the] topic.

We also uncovered a possible link between these four documents and a piece of correspondence. In a letter to Max Knoll from 1959, Zuckerkandl references a previous letter he wrote that outlined ideas for a possible lecture at Eranos (date unspecified) and for which he received no answer (CA OTUFM 62-A-012); at the beginning of “Zeit und Raum” Version A (CA OTUFM 62-B-1-31), Zuckerkandl addresses an unknown reader, offering them the essay in case they wanted to suggest Zuckerkandl for a presentation at the 1957 Eranos Conference. Zuckerkandl’s references to the Eranos conference in the late 1950s evinces that Zuckerkandl aspired to be a participant several years before his first lecture in 1960; he had possibly worked for four years on material! This sort of archival detail brings new information to light about Zuckerkandl’s life, work, and relationships, and we hope that other individuals are as excited by these discoveries as we are.

Dating the items: handwriting and manuscripts

Many items described in the index are handwritten by Zuckerkandl, including manuscripts and pieces of correspondence, a habit he maintained until his passing in April 1965 despite having access to a typewriter. This is typically a clue to Zuckerkandl’s authorship of an item where it is otherwise not indicated, and context is unclear. A new challenge, however, soon presented itself, since many correspondence items, whether handwritten or typed, have added handwritten dates by a second, unknown author (possibly librarians or archivists at the location of the items). Occasionally these dates are indicated with question marks (Items 012 [CA OTUFM 62-A-012], 013 [CA OTUFM 62-A-013], 014 [CA OTUFM 62-A-014]), and in one case with two possible dates (Item 028 [CA OTUFM 62-A-028]).

We realized that these added dates are the unknown author’s attempt to organize the items in chronological order, since Zuckerkandl would typically only date the day and month in his letters, but not the year. Through careful study of all the correspondence items, and coordinating with other materials from all the archival sites, we were able to find a definitive chronology, including the correct dating for Item 028 [CA OTUFM 62-A-028] as 1961.

Through repeated study and comparison of multiple handwritten items, we were eventually able to “decipher” idiosyncrasies in Zuckerkandl’s writing, which allowed us not only to move forward with item descriptions but to do so more efficiently and occasionally to revisit previous items that had been “undecipherable.” For instance, Item 034 (CA OTUFM 62-A-034) has enough detail to be dated accurately to 1961 despite the missing date, and the writing is neat enough that it provides a good example of Zuckerkandl’s handwriting. This letter highlights, for instance, Fröbe-Kapteyn as the addressed and instances of capital letters D, T, W, J, and F, the last of which is subtly different to letter T. 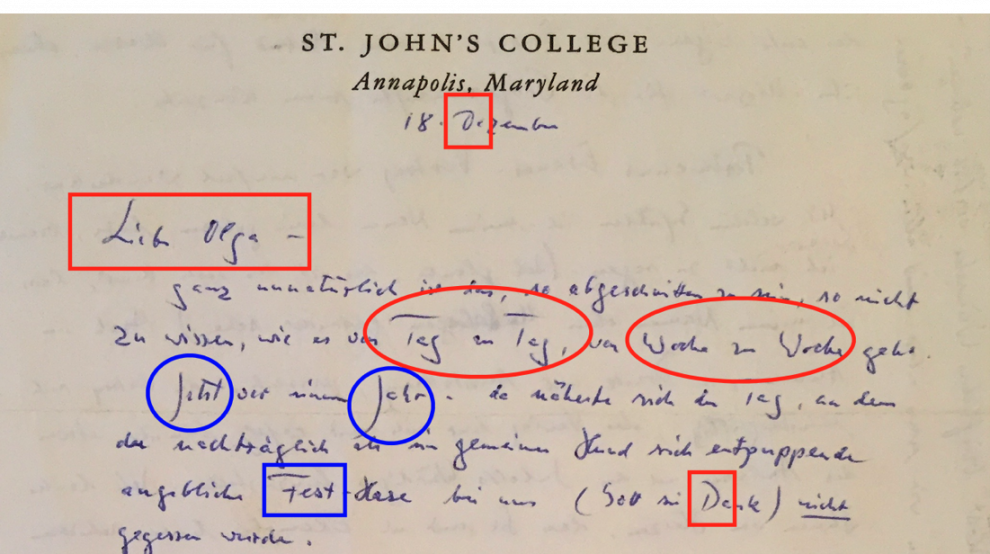 Analyzing tidy examples like this one make it a lot easier to revisit documents like Item 025 (CA OTUFM 62-A-025), which is undated and in pencil handwriting. Here, we highlighted similarities in Item 025 to Item 034, and through context we can date it to earlier in 1961, despite the missing date. 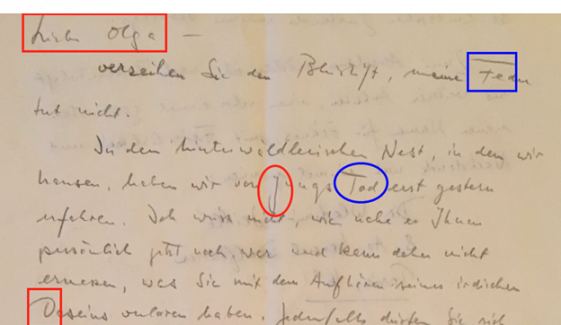 Through learning Zuckerkandl’s handwriting, we were also able to attribute Item 129 (CA OTUFM 62-A-129) NOT to Zuckerkandl but to his sister Hermine Müller-Hofmann, despite context clues pointing to Zuckerkandl as the possible author. 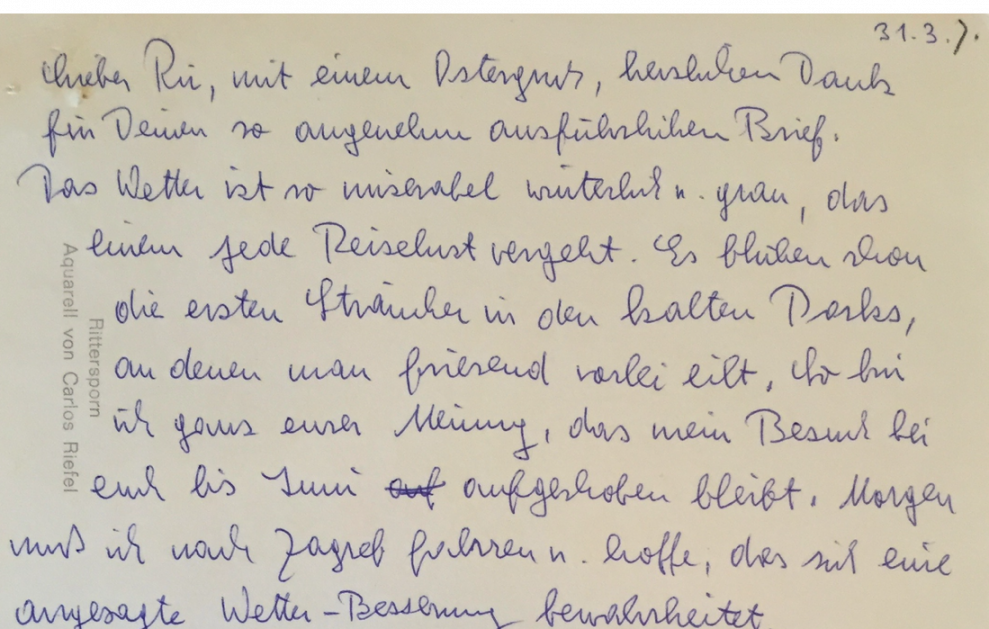 Since the COVID-19 pandemic began during the initial stages of our work, our collaboration had to be done entirely remotely. Being able to access our work through shared online folders was helpful even before the pandemic, and when the pandemic hit, we were able to continue with minimal interruptions. In fact, the three research assistants were all in the same room together for the first time this October! 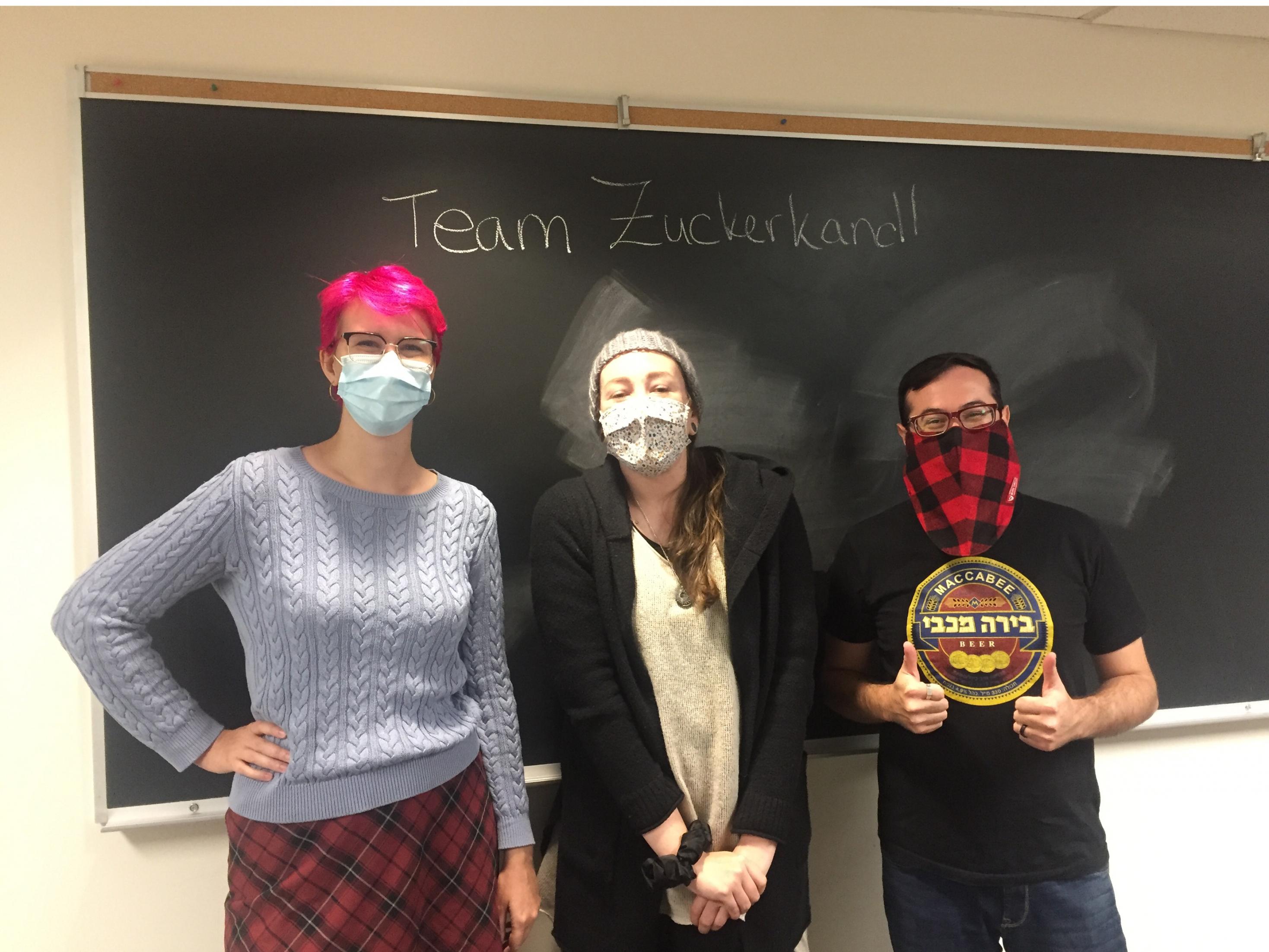 As an extra bonus, while we worked from home, our furry friends were also around to keep us company! 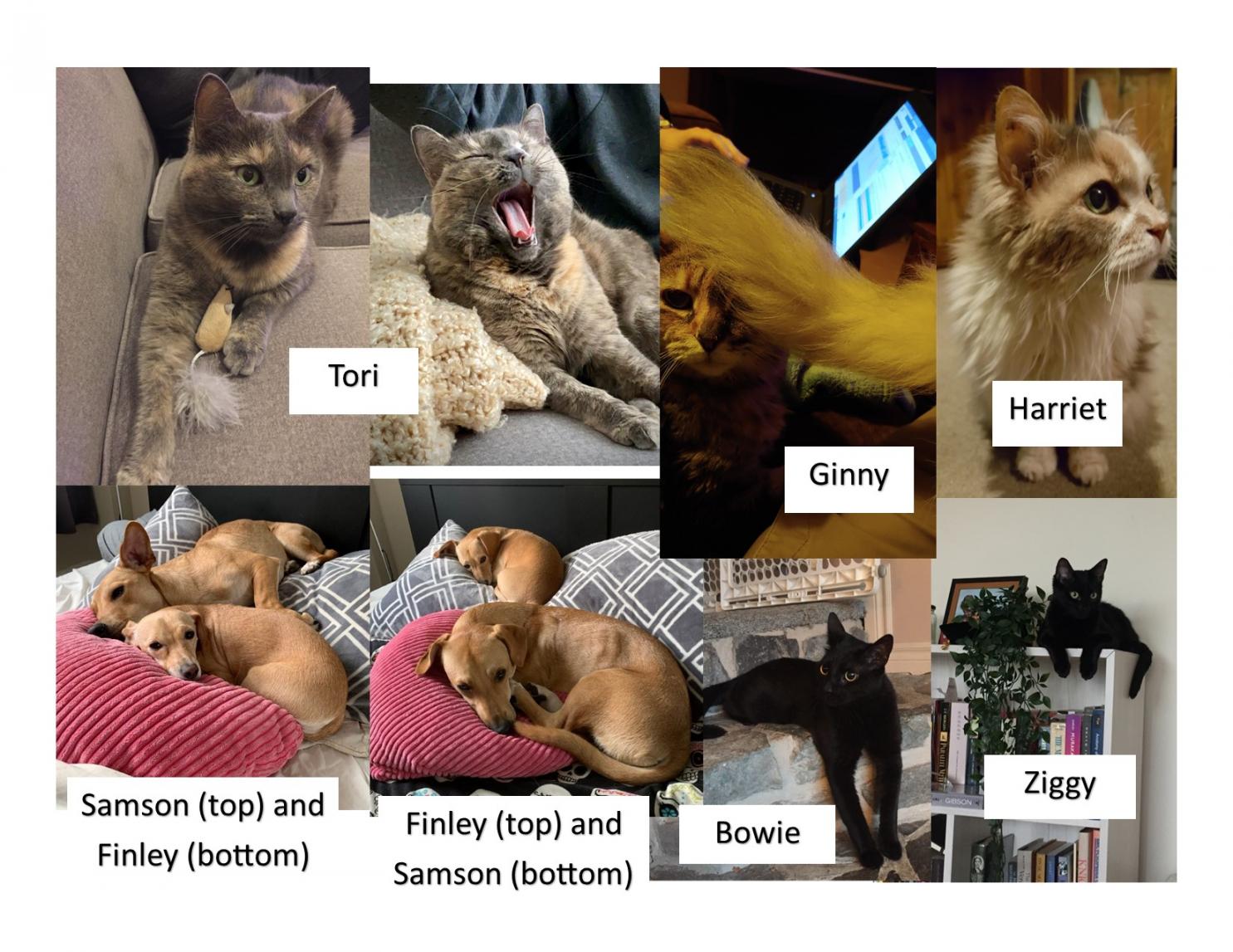