This week's blog is written by Brooklyn Bohach, one of the participants in the 2021 Undergraduate Research Showcase. Brooklyn is a performer, producer, intersectional environmentalist, and community organizer. She graduated from the University of Toronto in 2021 with a double major Jazz Performance and Environmental Science, and a certificate in World and Popular Musics. Read on to learn about her research, and don't forget to check out her poster if you missed it in April.

For a child from where prairie meets mountain, I’ve always had a curious connection to the ocean. My mom loves to tell folks about how when I was an infant, she needed only to turn on the shower and the sound of the water instantly brought me peace. My first career aspiration was to be a “sea protector.” My second, a ballet dancer. When I was 6, my family started spending our summers on Epekwitk (Prince Edward Island). Our annual trip to Unama’ki (Cape Breton Island) was always a highlight of the year. Both Epekwitk and Unama’ki are part of Mi’kma’ki (Mi’kmaq Territory). On these lands and waters, I was steeped in folk music traditions and given the opportunity to grow my love of the ocean from something intangible to something rooted in lived experience.

The pull towards both art and nature has persisted since this childhood beginning. To me, both bring a sense a wonder and deeper understanding of life and the universe. When it came time to decide my path at university, I agonized over picking one specialization. I thought I had to. Then I came across this passage from biologist Roger Payne’s book Among Whales. He writes:

Something clicked at these words. I realized that art and science may support one another in deeply beautiful and impactful ways. I wanted to be a part of that intersection. Fast forward five years and I  have just graduated with a double major in Jazz Performance and Environmental Science.

I had the opportunity to try my hand at weaving together my majors through an independent research project during the Winter 2021 semester. The direction of my research took shape as I read xwélméxw (Stó:lō) scholar Dylan Robinson’s book Hungry Listening. Robinson focuses his writing on contact zones of Indigenous and settler musics, but I was struck by the relevance of his scholarship to knowledge creation contexts that aim to bridge Indigenous Knowledge (IK) and mainstream science.[2]

Pairing IK and mainstream science is a hot topic in Canadian academia[3], but despite identifying communication as a primary challenge, studies that address listening in these contexts are virtually non-existent. This is particularly concerning since much IK is orally transmitted and, as Robinson points out, ethical engagement with IK requires following context-specific listening protocols. I suspected that Robinson’s scholarship, particularly that on “critical listening positionality,” could be key to addressing this gap.[4] (It is only as I write this blog post that I notice the theme of “listening” connects back to the excerpt from Payne’s book that set me on this path!) 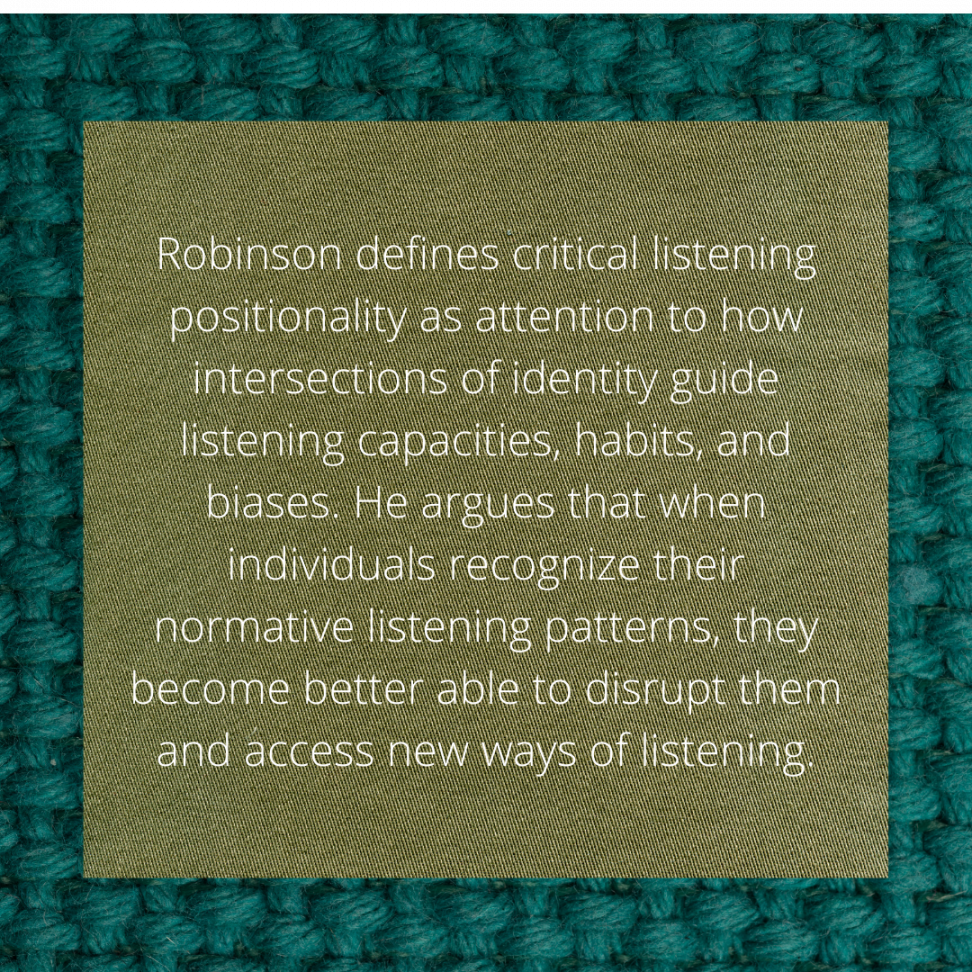 It was important for me to stay aware of my own critical listening positionality as I moved through this project: I am a queer white settler who has received extensive formal training in Eurocentric performance artforms and sciences. My listening is therefore deeply influenced by Eurocentric paradigms. Since 2015, I have assumed the identity of musical improviser, primarily informed by Black American Music and Pauline Oliveros’s practices of Deep Listening. My research, particularly my use of the term “listening,” must be understood in relation this positionality.

Reflecting on Robinson’s work and my own positionality led to my primary research question: How might Two-Eyed Seeing[5] and critical listening positionality work together to facilitate a more robust and nuanced understanding of listening, particularly in contact zones of knowledge creation on Unama'ki? (I know this is a mouthful – but please, let me explain!) 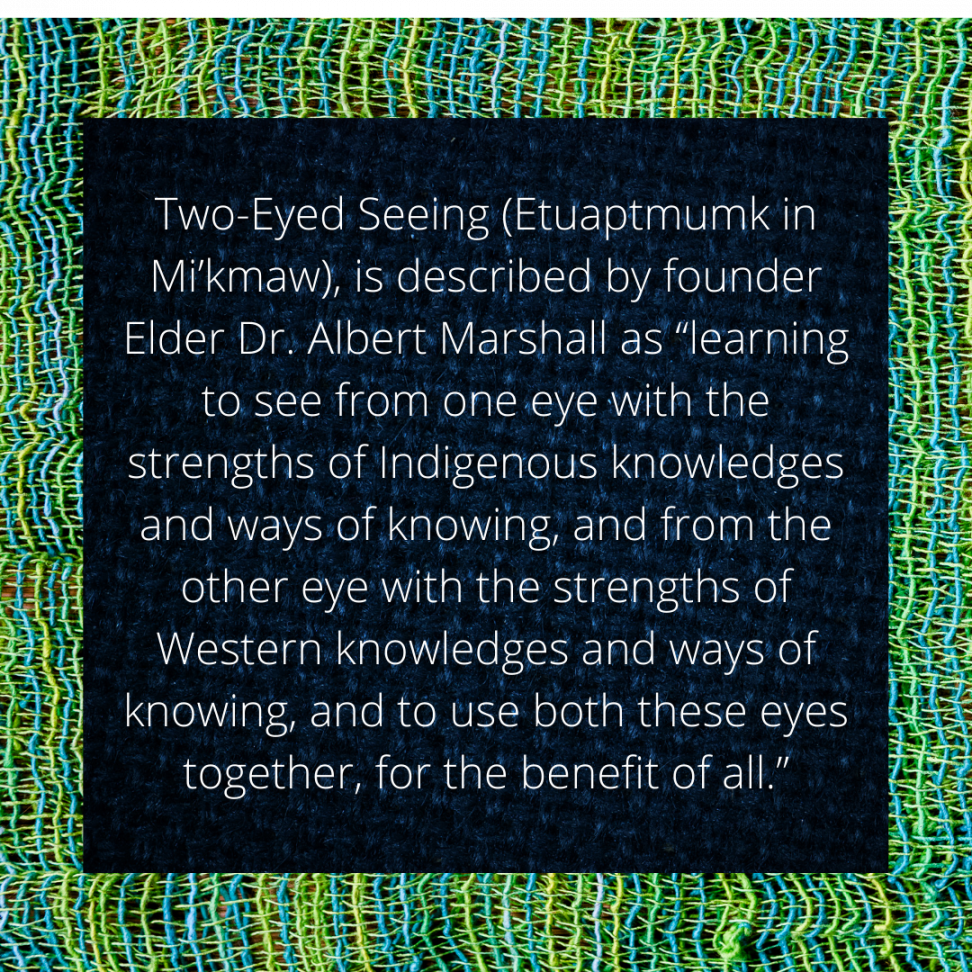 Unama’ki (Cape Breton Island) is known for its vibrant music (and listening) communities. It is the birthplace of Two-Eyed Seeing, a leading framework for research that engages multiple knowledge systems. As I mentioned previously, it also happens to be a place that nourished my own journey as a musician and scientist. Locating my study on Unama’ki was therefore both practical and personal.

As part of my research, I interviewed four individuals who live and work at Mi’kmaq-settler intersections of knowledge creation (with Research Ethics Board approval). 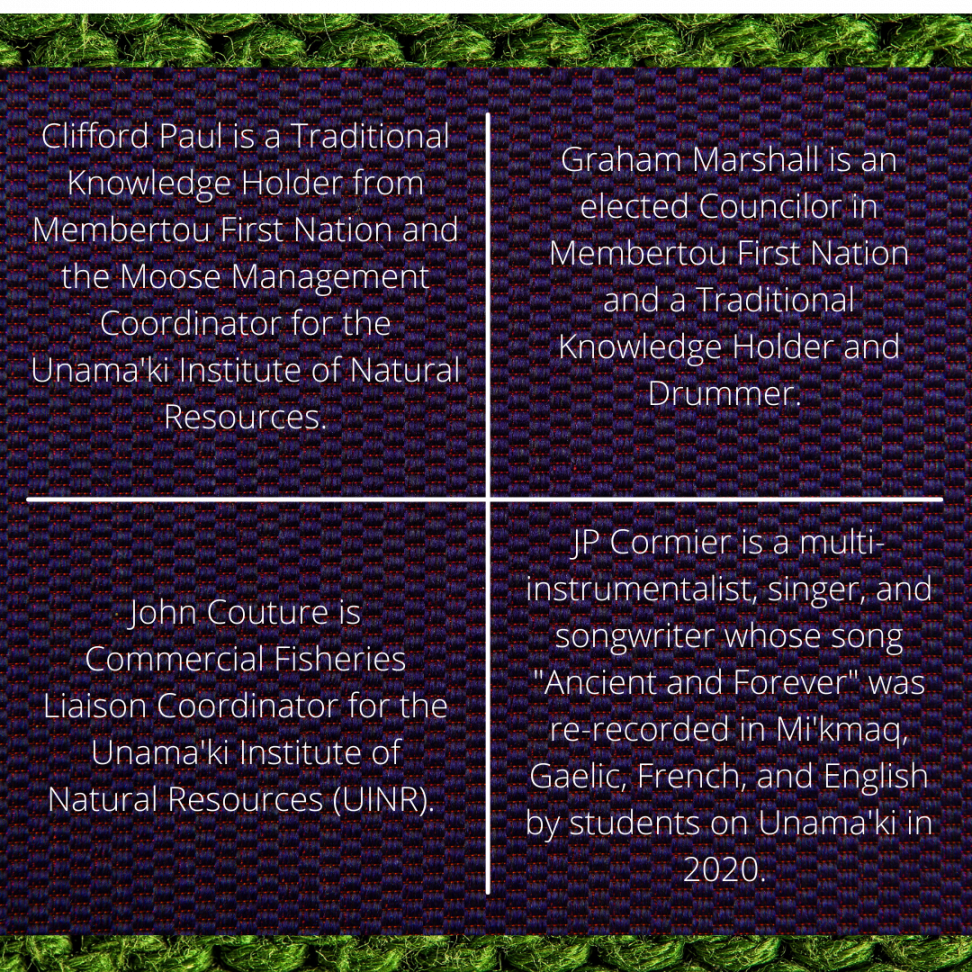 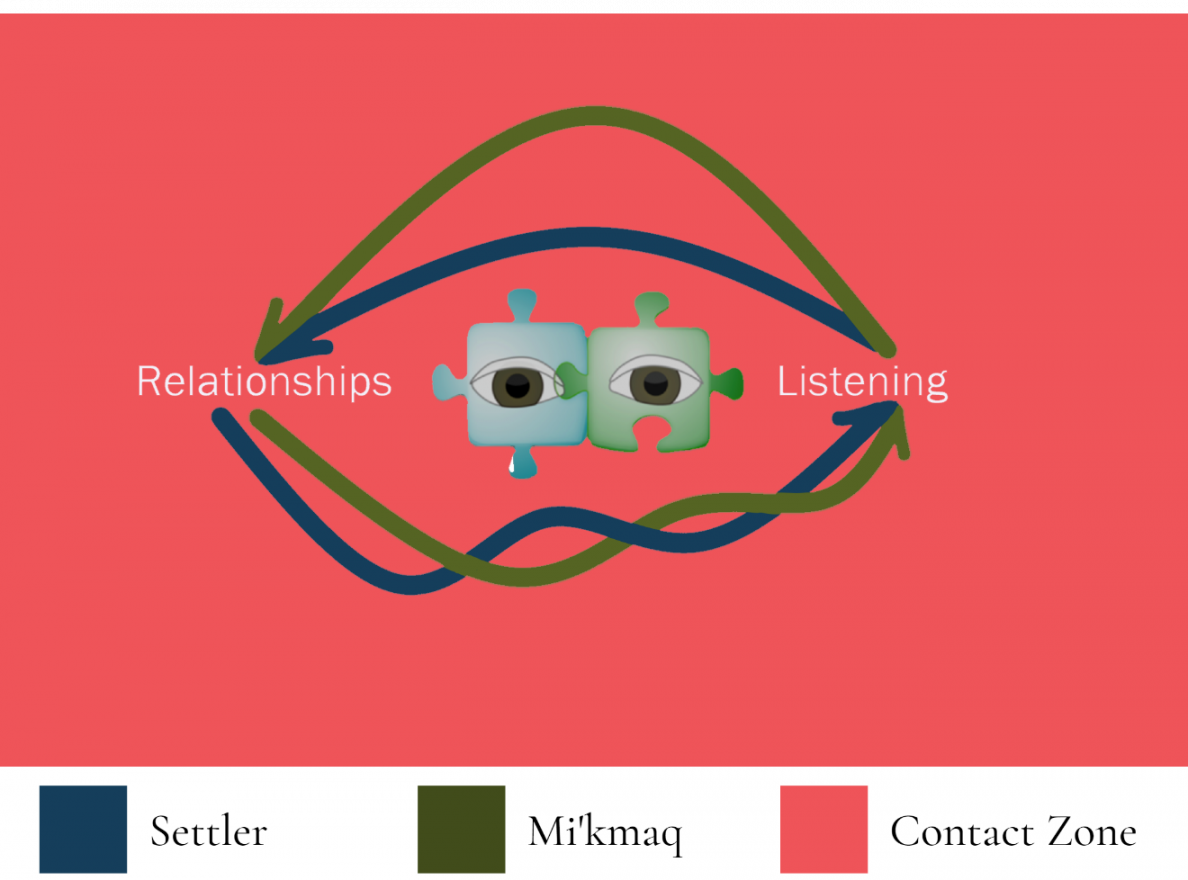 The red background represents a contact zone, which occurs when individuals or ideas from different cultures interact. As Dylan Robinson describes in Hungry Listening, “highly asymmetrical relations of domination and subordination” often orient these spaces.[6] As a framework for Indigenous and settler knowledge creation, Two-Eyed Seeing aims to equitably restructure such relationships so they are brought “eye-to-eye.”[7] I show this by placing the logo of Two-Eyed Seeing in the centre of the contact zone.

Distinct green and blues lines represent Mi’kmaq and settler presences in the knowledge creation contact zone. Though the lines may weave and intersect, particularly as relationships progress, they never blend. Each line flows along a path that is guided by the unique critical listening positionality of the individual it represents. For example, the Mi’kmaq (green) line is cast wider than the settler (blue) line to account for the expansive understanding of listening that many Mi’kmaq hold compared to standard Eurocentric listening practices. That is, that listening includes the intuition, heart, and ears. Back to the model, the smaller area held within the blue settler listening line acknowledges that listening protocols may restrict access to certain knowledge or may simply not be comprehensible to settlers.[8]

Through my research I realized that while Two-Eyed Seeing introduces structures to a contact zone so that equitable relations between knowledge systems and their ambassadors are possible, it is critical listening positionality that help determine if equity is reached in practice.

I acknowledge that my model is over-simplified, idealized, and aspirational. Colonial structures and ideologies of domination and subordination are not so easily overcome or dismantled. However, my research suggests this is in large part because settlers generally pay poor attention to the cycling of relationships and listening. This inattention may seem benign, or perhaps the connection between listening and relationships seems too obvious to be worth deep consideration. However, in a dominating culture that fetishizes individualism, competition, self-reliance, objectivity, and the supremacy of sight over other senses, we shouldn’t underestimate the weight and significance of this connection.[9] (It is not lost on me that, in comparison, Indigenous ontologies tend to be rooted in relationality.)[10]

As Canada and its institutions profess to prioritize reconciliation, my project highlights the need for settlers to investigate their own critical listening positionalities. I believe doing so will go a long way towards addressing the challenges of communication and distrust that so often plague contact zones of knowledge creation between Indigenous Knowledge and mainstream science.

[5] Cheryl Bartlett, Murdena Marshall, and Albert Marshall, “Two-Eyed Seeing and Other Lessons Learned Within a Co-Learning Journey of Bringing Together Indigenous and Mainstream Knowledges and Ways of Knowing,” Journal of Environmental Studies and Sciences 2, no. 4 (2012): 331–40.

[7] Bartlett, Marshall, and Marshall, “Two-Eyed Seeing and Other Lessons Learned Within a Co-Learning Journey of Bringing Together Indigenous and Mainstream Knowledges and Ways of Knowing,”: 331–40.

[9] See for example: Lee-Anne Broadhead and Sean Howard, “Confronting the Contradictions Between Western and Indigenous Science: a Critical Perspective on Two-Eyed Seeing,” AlterNative: an International Journal of Indigenous Peoples 17, no. 1 (2021): 111–19.; Paul, Daniel, We Were Not the Savages: A Mi’kmaq Perspective on the Collision Between European and Native American Civilizations, (Winnipeg: Fernwood Publishing, 2000).; Robinson, Hungry Listening.

[10] Shawn Wilson, “Progressing Toward an Indigenous Research Paradigm in Canada and Australia,” Canadian Journal of Native Education 27, no. 2 (2003): 161.